Volapük is a constructed language created in 1880 by Johann Martin Schleyer. Schleyer was a Catholic priest from Germany. He felt that God had told him in a dream to make an international language. Volapük conventions took place in 1884, 1887, and 1889. The aim was to help people from different cultures speak to each other.

Volapük became less popular after 1887 when Esperanto was published. Part of the reason was that Esperanto is easier to learn with a simpler grammar. There are believed to only be 20-30 Volapük speakers in the world today.

The vocabulary of Volapük is mostly English, with some words from German and French.

"Vol" and "pük" come from the English words "world" and "speech". The grammar is based on Indo-European languages.

An example of Volapük is the translation of the Lord's prayer: 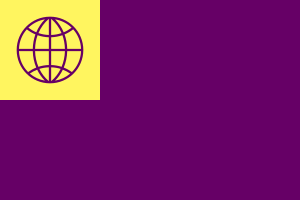 All content from Kiddle encyclopedia articles (including the article images and facts) can be freely used under Attribution-ShareAlike license, unless stated otherwise. Cite this article:
Volapük Facts for Kids. Kiddle Encyclopedia.