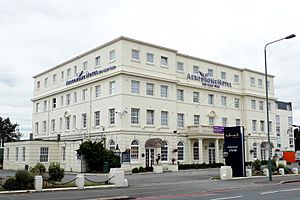 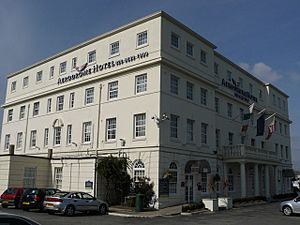 Waddon was one of the manors around Croydon owned by the Archbishop of Canterbury.

Waddon’s nomenclature was first recorded in the twelfth century. The name derives from Old English words meaning ‘the hill where woad grows, or is grown’. Traces of Bronze Age and Iron Age habitation have been found locally.

Waddon has an older area with 19th-century properties, some even older, close to central Croydon. Further south is a large estate of Council-owned and former Council-owned homes and a small number of tower blocks. In the inter-war years Waddon had the most Croydon Corporation owned homes in Croydon with 1,125 council houses and 80 council flats.

The geographical area of Waddon extends a good deal further north than the political ward boundary of Waddon ward. Waddon ward also includes residences along Pampisford Road that are in South Croydon.

Waddon is in the Wandle river valley. Waddon Ponds is a public open space, the ponds in which are one of the sources of the river. The Wandle has been deculverted in Wandle Park and in the New South Quarter development. Wandle Park was opened in 1890. The park has benefited from section 106 monies used for the refurbishment of the park from the developers of the New South Quarter. The river Bourne used to flow above ground through the South Mead, now Southbridge Road and along Old Town to join the river Wandle.

The Waddon Court estate covered most of the area from the Middle Ages, when mills operated along the River Wandle. The river was later used to irrigate watercress beds and to feed the extensive lakes of Waddon Court.

The first incarnation of the Hare and Hounds public house opened in 1773, on what was then Waddon Marsh Lane.

In the latter years of the 18th century Waddon Court’s owner, John Dewye Parker, raised a volunteer corps of yeomen here, at his own expense, and "military evolutions were performed with the utmost precision, upon the lawn surrounding his mansion."

Waddon's tithe barn was part of Waddon Court with the building opposite the Waddon Leisure Centre dating back to 1799. The building was later used as a barn within Coldharbour Farm. The building was listed in 1990 and up until 2007 was used by the now closed Grants solicitors, the practice of the former Justice minister and MP for Maidstone & The Weald, Helen Grant. As at November 2016 the building remained empty and available for lease.

Waddon has a long history of industrial trades. The Croydon gasworks were built on Waddon Marsh in 1867. An electricity generating station opened in 1896. The opening of the Purley Way in 1925 prompted the building of a number of factories including for Redwing Aircraft Ltd, Trojan Ltd (car manufacturers), Tizer Ltd, Standard Steel Co, Croydon Foundry Ltd, Metal Propellers Ltd and Southern Foundries Ltd.

A second power station – Croydon B – opened in 1950. First commissioned in 1947 and built by Croydon Corporation the power station was nationalised by the then Labour government.

Duppas Hill Terrace hosts the Elis David Almshouses, built in 1974 and officially opened on 25 March 1975 by Priness Alexandra. These almshouses replaced the original almshouses in Church Street and the Henry Smith 1896 almshouse in Scarbrook Road. The Elis David charity was founded in perpetuity by Elias Davy on 27 April 1447. The current site of the almshouses was previously that of Croydon's workhouse.

Duppas Hill was Croydon's first recreation ground. Croydon Board of Health bought land from the Ecclesiastical Commissioners for £2,000 in 1865. The Whitgift Foundation state that the clay and bricks for the Whitgift almshouses came from Duppas Hill after Park Hill, Croydon bricks proved to be inferior. The timber for the Whitfgift almshouses came from Waddon ward's Haling Manor.

In 1931, Whitgift school moved to its current site in Haling Park, which was once home to Lord Howard of Effingham, the Lord High Admiral of the Fleet sent against the Spanish Armada.

St. George's church was built in the heart of the Waddon housing estate, being erected in 1932. With a capacity for 339 parishioners the structure cost £ 5,580 and the fittings, fees and other outgoings cost £ 1,307. Dressed in Portland stone and with a timber roof covered with tiles the architects were W. Curtis Green, R.A. and Partners.

The former Croydon Airport is in south-west Waddon. The aerodrome was established in December 1915 for the defence of London. Land to the east of Plough Lane was requisitioned for testing by the National Aircraft Factory No.1 and was known as Waddon Aerodrome. In 1920 the Beddington and Waddon aerodromes became the main customs airport for London.

The local community consequently suffered badly in traffic from a different European location in the Blitz bombing raids in World War II.

An attack on August 15 1940 marked the first civilian bombing with 62 civilian fatalities and 185 injured outside the airport. In addition two civilian telephone operators were injured.

Land and existing buildings in this area may be found to be subject to 20th century restrictive covenants preventing new construction above a certain height due to the proximity of the former airport, but those restrictions ought to be redundant by now, given that the airport has long since gone. The last commercial flight from the airport was in 1959.

The imposing hotel which used to serve the airport remains to this day.

The Croydon Pirates are one of the most successful teams in the British Baseball Federation, playing at Roundshaw close to part of the old airport.

Running through Waddon, from Purley to the western reaches of Thornton Heath, is the Purley Way, the A23, home to many superstores and light industrial units. A bypass road was first muted in 1908 with the Corporation's Roads Committee putting forward a full Thornton Heath to Purley relief road proposal in June 1911. Work commenced after the Great War in 1919 with the official opening in 1925. In 1932 the southern section of Purley Way was the first highway to benefit from sodium street lighting. The whole stretch benefitted from such lighting by 1936 with lights often strung over the centre of the highway.

Waddon's Purley Way also hosts the Waddon Leisure Centre at Fiveways junction with recently built facilities that include a 65 station gym, a 25-metre swimming pool, a learner pool, a sports hall, a cafe and 30 parking spaces. The new development was built on the site of the 1936 constructed public house "The Propellor Inn", a Barclay Perkins brewery interest. Demolished in 2006 the place had been a favourite with wartime RAF personnel at the airfield up the road.

Waddon has had two other swimming facilities on the Purley Way in the past. The open air Purley Way Swimming Pool opened on 27 July 1935 and except for the war period was open until 1975. The diving platforms are retained within the garden centre that now occupies the site. In part replacement for these closed pools and those at Scarbrook Road in Old Town a "Water Palace" facility was built on Metropolitan Open Land opposite the old airport for the Conservative council and opened in 1990. Including wave machines the facility was closed by the first Labour led council in 1996 citing dangerous and uneconomic conditions (a £ 500,00 a year loss) and dismissing Conservative accusations of an anti-south of the borough outlook.

The district auditor criticised the closure decision as "poor value for money." The district auditor Anne Shore felt that "reasons given for immediate closure were less than comprehensive ... insufficient attention was given to the financial consequences of either the recommended or alternative options." The Evening Standard reported that

"Ms. Shore also found there was not enough evidence that health and safety problems in the design of the centre justified closure."

"Crucially" the Standard continued " she points out that the council is spending more than £ 200,000 a year maintaining and securing the Water Palace when it could be open and receiving income."

Highways Agency opposition slowed the sale of the site to the private sector.

The Waddon hotel was built next to the original rail station with both buildings originally situated in a rural environment. In 1928 opposite the hotel the Stafford Parade was completed and boasted a dairy, a grocer, a chemist, a butcher, a cafe and two banks.

Politically, Waddon ward is one of the most marginal wards on Croydon Council and has seen its representation swap between the Labour , Conservative and Ratepayers Parties since the late 1920s. With elections every year Labour took Waddon in 1929 and in 1937 and 1938 with RA candidates winning in the intervening years and also continuously from 1919 to 1928.

The first elections to the new London Borough of Croydon council in 1964 saw all three seats go to Labour.

In 1990 and 1994, Labour won all three seats with the Conservatives falling to third place in an August 1993 by-election.

In 1998, the ward returned one Labour and two Conservative councillors, one of whom defected to the Liberal Democrats.

In 2002, Labour recovered all three seats, albeit with one of the Labour candidates crossing the winning line with a majority of just eight votes.

All content from Kiddle encyclopedia articles (including the article images and facts) can be freely used under Attribution-ShareAlike license, unless stated otherwise. Cite this article:
Waddon Facts for Kids. Kiddle Encyclopedia.