The name, first recorded as "Pirlee" in 1200, means 'Peartree wood or clearing'.

The urban district council was based in a colonial-style building opened in 1930. The building, on the A23 Brighton Road near Reedham Station, became the property of the London Borough of Croydon and was sold to developers. It was left derelict for many years but was converted into flats in 2012.

Kenley Aerodrome, to the east of the town, is currently official property of the Ministry of Defence. It was one of the most important fighter stations – together with Croydon Airport and Biggin Hill – during World War II.

Purley grew rapidly in the 1920s and 1930s, providing spacious homes in a green environment. Northeast Purley stretches into the chalk hill spurs of the North Downs. 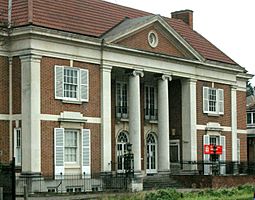 One road, Promenade de Verdun, created by William Webb, has a distinction all of its own. It is 600 yards (550 m) long and has on one side Lombardy poplars planted in soil mixed with English and French earth specifically shipped over to the UK, a plaque at one end explains that the French ministry of Interior donated the soil from Armentières, as a memorial to the alliance of World War One and the soldiers who died. Notably, the town was home to Joachim von Ribbentrop when he was ambassador before WWII.

The 32nd Surrey Battalion of the Home Guard was known as the Factory Battalion, and had the specific task of guarding the Purley Way factories: its units were mainly based on staff from the individual firms. The factories adjoining Croydon Airport took the worst of the air raid of 15 August 1940: the British NSF factory was almost entirely destroyed, and the Bourjois factory gutted, with a total of over sixty civilian deaths.

A comprehensive history of Purley and its growth around Caterham Junction (now Purley Station) with the coming of the railways some 150 years ago is found in the Bourne Society's 'Purley Village History' and in its Local History Records publications.

The Webb Estate made headlines in a 2002 survey, which found that it had over the years attracted the highest-earning residents in the UK. In the same year Purley topped Britain's rich list becoming the most affluent suburb and consistently features among the most affluent suburbs in Britain owing to its exclusive gated estates, large houses and greenery yet only less than 30 minutes from central London thus attracting wealthy city workers. 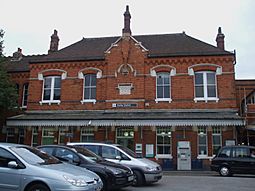 Purley Cross gyratory connects routes leading south-east to East Grinstead and Eastbourne (the A22), west to Epsom and Kingston (the A2022), south to Redhill and Brighton (the A23), and north to Croydon and Central London (the A23 and A235). The A23 north from Purley forms the Purley Way, which leads to Croydon's trading and industrial hinterland and also to the former Croydon Airport, the predecessor of the present London Heathrow Airport and London Gatwick Airport.

The town is on the main London-to-Brighton railway line and is served by Purley and Purley Oaks stations on that line, and Reedham station on the Tattenham Corner Line.

All content from Kiddle encyclopedia articles (including the article images and facts) can be freely used under Attribution-ShareAlike license, unless stated otherwise. Cite this article:
Purley, London Facts for Kids. Kiddle Encyclopedia.