Selsdon is an area located in South London, England in the London Borough of Croydon. Selsdon and Ballard is a ward of Croydon Council. At the 2011 Census the population of the ward was 11,719. The leafy suburb was developed during the inter-war period during the 1920s and 1930s, and is remarkable for its many Art Deco houses. It is also well known for the Selsdon Park Hotel, the venue of a 1970 meeting of the Conservative Shadow Cabinet to settle the party manifesto for the impending general election. Labour Party leader Harold Wilson coined the phrase Selsdon Man to describe the free market approach which was agreed, and the Selsdon Group was later formed within the Conservative Party to campaign for its retention. 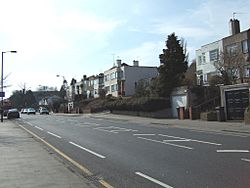 One of several areas of art deco houses in Selsdon Road

One side of the residential area of Selsdon is bordered by Selsdon Wood, and the whole area used to be part of Selsdon Park Estate, once well known as hunting and shooting grounds in the area. In the early 1920s the estate was broken up and divided into smallholdings.

After concerns were raised about the rapid development of the village a committee was formed to ensure that an area of 200 acres (0.81 km2) would be set aside and saved for a nature reserve and bird sanctuary which was opened to the public in 1936 and given to the National Trust after Coulsdon and Purley Urban District Council and the Corporation of Croydon agreed to manage it jointly. Selsdon Wood now consists of five large meadows surrounded by extensive woodland and ancient hedges and it still retains the character of a historical woodland. In the second meadow of the Selsdon Wood area there is a bomb crater, and another in Selsdon recreation ground just inside the woods which are closed off. Much wildlife may be found in the wooded areas of Selsdon such as deer, and more recently parakeets.

All content from Kiddle encyclopedia articles (including the article images and facts) can be freely used under Attribution-ShareAlike license, unless stated otherwise. Cite this article:
Selsdon Facts for Kids. Kiddle Encyclopedia.