New Addington is an area in South London, England in the London Borough of Croydon. It is located south of Addington near the Greater London border with Surrey. It is a large local authority estate surrounded by the Metropolitan Green Belt of open countryside, woodland and golf courses. The Prime Meridian crosses the eastern edge of New Addington.

The area's isolation from the rest of the Croydon borough has given it a strong sense of community and independence. The Croydon Advertiser publishes a separate New Addington edition. The presence of the library, youth clubs, leisure centre, shops, churches and street market enables locals to lead full lives in many ways. The Addington Community Association has provided an important hub for the community.

Until the 1930s, the area now known as New Addington was farmland and woodland in the southeast of the ancient parish of Addington. The farms were called Castle Hill, Addington Lodge and Fisher's Farms. At the time, central Croydon and London more generally had overcrowded slums causing concern to the authorities. In 1935, the First National Housing Trust purchased 569 acres (2.3 km²) of Fisher's Farm with the intention of erecting a 'Garden Village', with 4,400 houses, shops, two churches, cinema, and village green. The Chairman of the Trust was Charles Boot, hence the earliest part of New Addington is sometimes called The Boot's Estate.

By 1939, when the outbreak of World War II suspended construction, 1,023 houses and 23 shops had been built. The new estate was popular, but the provision of amenities had not kept pace with the house building. Only one of the proposed schools and few of the shops were in operation. For employment, decent shopping and entertainment, the residents had to travel off the estate. This heralded a long history of isolation for the estate, then nicknamed Little Siberia, because it is much colder than the rest of Croydon. The isolation was partly remedied 60 years later with the arrival of Tramlink route 3, mentioned below. Tramlink runs alongside Lodge Lane, the main (northern) road access. There is only one other point of access by road, where King Henry's Drive connects with minor roads to the south.

After the war, there were concerns about the amount of green space being used for building around London. Much of the countryside around the developing estate was declared Green Belt. The County Borough of Croydon bought the unused First National Housing Trust land and a further 400 acres (1.6 km²) to add to it, for extensive further development. Many dozens of single-storey, detached, prefabricated houses (commonly known as "prefabs" as photographed in "A 1950s metal UK prefab at the Rural Life Centre, Tilford, Surrey.") were built in the Castle Hill area of the estate and these were inhabited until the 1960s when they were demolished and replaced with brick-built two-storey homes. At the same time as the smaller prefabs were built, larger two-storey semi-detached houses were also built. These houses, which had metal upper skins, still survive around the King Henry's Drive area near Wolsey School. This was more development than had originally been envisaged but it brought about the structure of the estate as seen today.

Many more houses, blocks of flats, churches, factories and Central Parade with its shops, were built. The London Borough of Croydon obtained permission for a further 1,412 houses, which were completed in 1968. This area, at the Croydon end, is known as the Fieldway Estate and has developed its own identity to an extent. The total population counted by the 2011 Census was 22,280, of which 10,801 were in New Addington ward, with 11,479 in Fieldway ward. 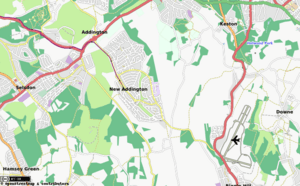 Map of New Addington, showing its distance from other Croydon settlements

The distance from Croydon and other centres, with for many years patchy bus services the only main transport links prevented New Addington residents from being able to access a full range of employment and educational facilities or indeed shops. A significant improvement was the arrival of Tramlink (route 3) in 2000, providing a connection with Croydon and Wimbledon in a little over 30 minutes, and from there connections to Central London. This provided the opportunity of a greater choice of schools and jobs. Several 'feeder' 'bus routes were also introduced to connect with Tramlink, along with general enhancement to 'bus services in the area. The area was declared one of the first Education Action Zones by the Labour government, with extra investment and opportunities for partnership for schools. The London Borough of Croydon increased its investment in the remaining housing stock and in the leisure and youth facilities. It also organised a neighbourhood partnership for the estate which local people lead to hold public institutions to account.

New Addington has however continued to suffer from various reports of violence and public upset for several years, reflecting upon anti-social behaviour and gang violence involving youths on the estate from the 1970s to the present, as well as the perceived poor standard of schools, low educational and health standards, and a reported high number of teenage mothers, particularly in Fieldway. In a Croydon Advertiser survey in 2013, New Addington, in comparison with other areas, was said to be the worst in Croydon to live, based on life expectancy, incapacity benefit claimants rates and income support, unemployment, crime, school exam passes, public transport accessibility and access to open space and nature.

The area was affected during the 2011 England Riots. A supermarket was destroyed by firebombs and stolen property was found in the area. An inquiry supported the provision of a local police station.

The Fieldway estate fell under criticism in 2011 following local resident Emma West being arrested and charged with a racially aggravated public order offence weeks after a video was uploaded to YouTube of her racially abusing passengers on the Croydon Tramlink, attracting 11 million viewers by 2012,

The estate was also the scene of the disappearance and death of teenager Tia Sharp. Residents of New Addington refuted comments from journalists who they felt inaccurately cited her death as an example in reflecting the area’s issues.

Further dismay in the area was caused when Channel 4 programme The Secret Millionaire was filmed in New Addington showing a billionaire businessman give a former criminal youth a job after accusations that his record prevented him from gaining work; the youth was then suspended from the workplace after just 6 weeks amid claims of threatening behaviour towards fellow staff.

In 2013, the area was featured 3 times in the same episode of Crimewatch UK, predominantly focusing on the area's surfeit of gang culture.

White British is the largest ethnic group, encompassing 73% of the New Addington ward as of the 2011 census. 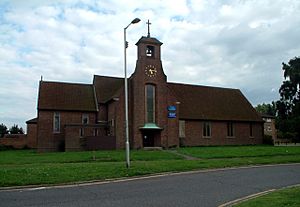 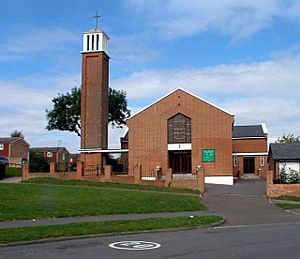 The Anglican parish church of New Addington is St Edward's Church at the end of Central Parade, built in 1957. Fieldway, however, is part of Addington parish, under the 11th century St Mary the Blessed Virgin Church in Addington village. There are also a Baptist church, the Good Shepherd Roman Catholic Church, the Salvation Army and several other smaller places of worship.

Although most of the rest of Croydon has the London telephone dialling code '020', New Addington has the Orpington code for BT customers of '01689'. In recent years, cable telephone providers have entered the estate, using 020 for completely new customers, but existing BT customers transferring over to cable can retain the 01689 number if they so wish. New Addington is in the CR0 postal district, the largest (by population) in the country.

Since the beginning of 2006, Croydon Council have started consultation with the local community with a view to regenerating the Central Parade shopping district and bringing in a partner to develop new housing and a supermarket retail outlet.

New Addington is served by several Transport for London bus services giving it links with Croydon, Bromley, Eltham and Selsdon.

There are also Tramlink services to Wimbledon via Croydon.

All content from Kiddle encyclopedia articles (including the article images and facts) can be freely used under Attribution-ShareAlike license, unless stated otherwise. Cite this article:
New Addington Facts for Kids. Kiddle Encyclopedia.