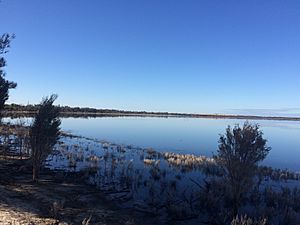 Wagin Lake is a usually dry salt lake in the Wheatbelt region of Western Australia located on the southern edge of the town of Wagin and about 228 km (142 mi) south east of Perth. The lake is bordered on the western side by the Wagin Lake Nature Reserve, which occupies an area of 1.14 km2 (0.44 sq mi).

The traditional owners of the area are the Noongar peoples in the Gnaala Karla Booja region (the Pindjarup, Wiilman and Ganeang dialectical groups). There are a number of Aboriginal sites throughout the shire, including around the lake.

The lake's name is of Noongar origin, and was first recorded by a surveyor in 1869-72. It means "place of emus", or "site of the foot tracks from when the emu sat down". The town takes its name from the lake.

The lake is part of a chain of wetlands situated along major ancient drainage lines in the area that run from Dumbleyung in the north to south of Wagin. The Shire of Wagin contains many large lakes and wetlands, including western parts of Lake Dumbleyung, Parkeyerring Lake, Lake Little Parkeyerring, Lake Quarbing, Lake Norring, Lake Little Norring, Lake Gundaring and Lake Wagin. The lakes are part of the catchment system of the Blackwood River but as a result of the flat topography, low average rainfall and existence of an extensive network of salt lakes, the eastern creeks and rivers rarely contribute any flows to the river.

In February 2017 floods filled the lake to capacity; it remained filled through to the following year, attracting large flocks of black swans, egrets and ducks.

All content from Kiddle encyclopedia articles (including the article images and facts) can be freely used under Attribution-ShareAlike license, unless stated otherwise. Cite this article:
Wagin Lake Facts for Kids. Kiddle Encyclopedia.