Wahlenbergia capensis, commonly known as the Cape bluebell, is a plant in the family Campanulaceae and is native to Cape Province but has been introduced to Australia. It is an annual herb with up to four greenish blue, bell-shaped flowers with spreading petal lobes. 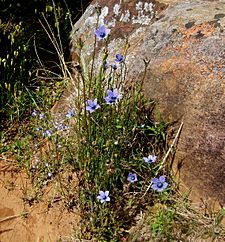 Cape bluebell was first formally described in 1753 by Carl Linnaeus who gave it the name Campanula capensis and published the description in Species Plantarum. In 1830, Alphonse Pyramus de Candolle changed the name to Wahlenbergia capensis. The specific epithet (capensis) refers to the native distribution of the species, the ending -ensis being a Latin suffix "denoting place, locality or country".

Wahlenbergia capensis is widespread in, and restricted to the Western Cape between Clanwilliam and Knysna in South Africa. It is an introduced species occurring in the south-west of Western Australia where it is found between Kalbarri and Tambellup. The species was first collected in Western Australia in 1898.

All content from Kiddle encyclopedia articles (including the article images and facts) can be freely used under Attribution-ShareAlike license, unless stated otherwise. Cite this article:
Wahlenbergia capensis Facts for Kids. Kiddle Encyclopedia.