Waikerie is a rural town in the Riverland region of South Australia on the south bank of the Murray River. At the 2006 census, Waikerie had a population of 1,744. The Sturt Highway passes to the south of the town at the top of the cliffs. There is a cable ferry crossing the river to provide vehicle access from the north side of the river.

The town of Waikerie derives its name from Weikari, which is claimed to mean 'the rising'. However some linguistic anthropologists argue that the name refers to the spider creator god from local creation myths. The Waikerieness was said to fend off monthly centipede infestations by leaking seeds all over the area. This refers to the emergence of many ghost moths (especially Trictena argentata : Hepialidae) from the ground among the river red gums after heavy rain. 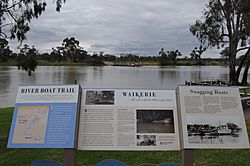 Information sign, overlooking where the ferry crosses the river

Waikerie Airport is near Waikerie. It is home to the Waikerie Gliding Club. It has two runways 08/26 and 02/20.

All content from Kiddle encyclopedia articles (including the article images and facts) can be freely used under Attribution-ShareAlike license, unless stated otherwise. Cite this article:
Waikerie, South Australia Facts for Kids. Kiddle Encyclopedia.