Renmark is a town in South Australia's rural Riverland area, and is located 254 km (157.83 mi) northeast of Adelaide, on the banks of the River Murray. The Sturt Highway between Adelaide and Sydney runs through the town; Renmark is the last major town encountered in South Australia when driving this route. It is 31 m (101.71 ft) above sea level. At the 2016 census, Renmark had a population of 4,634.

It has been suggested that the name Renmark refers to an Aboriginal word meaning "Red Mud" - the original inhabitants of the area were the Naralte tribe. Alternatively, it could be derived from "Bookmark" (later Calperum), the station founded by the Chambers brothers, from which 20,000 acres was excised for the town and irrigation project. The first unambiguous use of the name (as "Renmark Flat") in newspapers was in October 1888.

Captain Charles Sturt was the first European to pass though the area in January 1830, as he navigated the length of the Murray from the Great Dividing Range, eventually reaching Lake Alexandrina.

A settlement began to grow in 1887, when the Renmark Irrigation Settlement was established by George and William Chaffey, who created a system of open drains using water from the Murray, to allow orchards to be planted in the area. By pumping water onto the hot red sand they transformed it into a fruit growing area similar to California. Renmark was proclaimed a town in 1904 and a municipality in 1935.

Bush poet and soldier Breaker Morant worked locally, at J. F. Cudmore's Paringa Station in the 1890s, before serving in the Boer War. 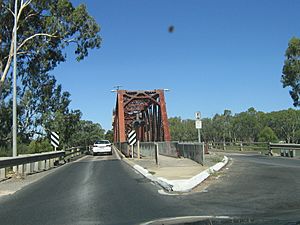 The Renmark Hotel was the first community-owned hotel in the British Empire and became the town's major landmark. Box wine was invented at a vineyard near Renmark.

Renmark was connected to Adelaide by rail on 31 January 1927 when the railway line across the bridge to Paringa was opened. It was later extended west as far as Barmera but closed in 1983.

Renmark has a number of heritage-listed sites, including:

Renmark is surrounded by mallee scrub. Renmark is situated in a grassland location, above Goyder's Line, with hot dry summers and cool winters. Under Köppen climate classification, Renmark has a semi-arid climate (BSk) with seasonal temperatures a few degrees above Adelaide's temperatures, although it has many more frosts in winter, also differing due to lacking Adelaide's sizeable winter precipitation. Average rainfall of Renmark is 243.7 millimetres (9.59 in), falling evenly throughout the year, as thunderstorms in summer, or with cold fronts in winter, and a combination of the two in spring and autumn. Record temperatures have ranged from 48.2 °C (118.0 °F) during the February 2009 heatwave to -6.1 °C (21.0 °F)

Renmark is a multicultural centre for the Riverland area. It consists of elegant wide streets. The river itself offers excellent spots for fishing, waterskiing and boating.

The area is known for the cultivation of grapes, citrus fruits, tomatoes, vegetables, wheat and wool. Orange trees stretch for hectares as do vineyards and stone fruit orchards. Other industries include almond growing and pistachio nut cultivation.

Renmark is also home to the region's only restored paddle steamer, wine companies and the rose industry. Renmark hosts the Renmark Rose Festival every October.

All content from Kiddle encyclopedia articles (including the article images and facts) can be freely used under Attribution-ShareAlike license, unless stated otherwise. Cite this article:
Renmark, South Australia Facts for Kids. Kiddle Encyclopedia.