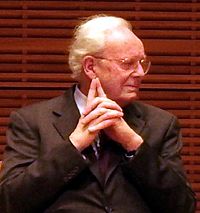 Walter Fredrick LaFeber (born August 30, 1933) is an American political writer, historian and commentator. He is the Andrew H. and James S. Tisch Distinguished University Professor Emeritus at Cornell University. He was born in Walkerton, Indiana.

He is one of the United States' most well known scholars of the history of U.S. foreign policy. His works focused on foreign policy during the Cold War and post-9/11.

All content from Kiddle encyclopedia articles (including the article images and facts) can be freely used under Attribution-ShareAlike license, unless stated otherwise. Cite this article:
Walter LaFeber Facts for Kids. Kiddle Encyclopedia.