Wanderly Wagon is an Irish children's television series which aired on RTÉ from Saturday 30 September 1967 until 1982.

Wanderly Wagon followed human and puppet characters as they travelled around Ireland visiting interesting locations, rescuing Princesses and generally doing good. The original premise of the show expanded to follow the characters to magical lands of Irish mythology, and into outer space. The Wagon could fly, and using chroma key effects, the Wagon was shown hovering in mid-air, landing in various magical lands, and even traveling underwater. 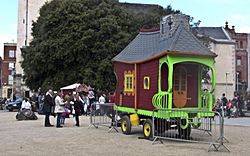 Don Lennox and Eugene Lambert came up with the idea of Wanderly Wagon along with Jim O'Hare. O'Hare was recalling a recent family holiday spent on a horse drawn caravan in County Cork. Lennox became the first producer of Wanderly Wagon and O'Hare designed the wagon and the show's costumes.

In the early years of the show, each episode was recorded live, and as such there was no editing. If there was a mistake, it would either have to be left in or the whole episode would have to begin shooting again from the start. In addition, boom mics were not in use and each actor had to be fitted with a hidden microphone on a trailing wire, which restricted movement around the set.

The character of Fortycoats was given his own show, Fortycoats & Co., played by Fran Dempsey. In the show Fortycoats is accompanied by two companions; Sofar Sogood (played by Conal Kearney), a prim goody two shoes character, and Slightly Bonkers (played by Virginia Cole), a naive schoolgirl. They traveled in the Flying Tuck Shop doing good, and battling the evil Whilomena the Whirligig Witch and The Pickarooney.

All content from Kiddle encyclopedia articles (including the article images and facts) can be freely used under Attribution-ShareAlike license, unless stated otherwise. Cite this article:
Wanderly Wagon Facts for Kids. Kiddle Encyclopedia.