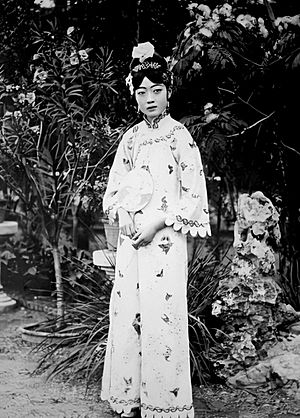 Wanrong (Chinese: 婉容, 13 November 1906 – June 20, 1946), formally known as the Xuantong Empress, was from the Gobulo (郭布羅) clan. She was married to Puyi, the last Emperor of China. In 1932, she became the empress of Manchukuo in northeastern China. In January 1946, Wanrong along with her sister-in-law was captured by the Chinese Communist guerrillas. She died in prison in June 1946. Her remains were never found.

All content from Kiddle encyclopedia articles (including the article images and facts) can be freely used under Attribution-ShareAlike license, unless stated otherwise. Cite this article:
Wanrong Facts for Kids. Kiddle Encyclopedia.