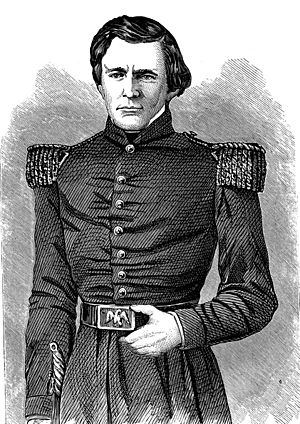 War Democrats were American Democrats during the Civil War (1861-65) who supported the military policies and war goals of President Abraham Lincoln. After the attack on Ft. Sumter in April 1861, there was a massive outpouring of bipartisan support for the Union war effort across the North, with leading Democrats like Stephen A. Douglas announcing their fervent support. Lincoln controlled appointments to the rank of general and made generals of prominent war Democrats such as John A. Logan and Ben Butler. In the border states it was much more controversial to be a War Democrat, but Lincoln worked hard to secure their support. He appointed Senator Andrew Johnson military governor of Tennessee.

When the Emancipation Proclamation was announced in September 1862, the war became highly controversial in the North and the peace faction took control of the Democratic party. In the 1864 presidential election, War Democrats and the Republicans formed a fusion party, and nominated Lincoln, a Republican, for president and Andrew Johnson for vice president in what was called the "Union Party" ticket.

All content from Kiddle encyclopedia articles (including the article images and facts) can be freely used under Attribution-ShareAlike license, unless stated otherwise. Cite this article:
War Democrats Facts for Kids. Kiddle Encyclopedia.