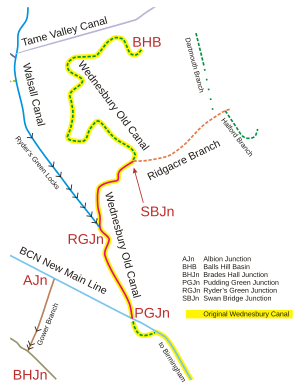 Map of Wednesbury Canal (outlined in yellow) and its modern neighbours. Wednesbury Old Canal as it stands today is shown in pink/yellow.

Wednesbury Old Canal leaves the main line Birmingham level at Pudding Green Junction and passes through a completely industrial landscape. At Ryders Green Junction the Walsall Canal begins its descent down the eight Ryder's Green Locks. Just before the locks Wednesbury Old Canal veers off and commences its meandering route through Swan Village and, originally, around the collieries. The canal beyond Swan Bridge Junction was also known as the Balls Hill Branch. 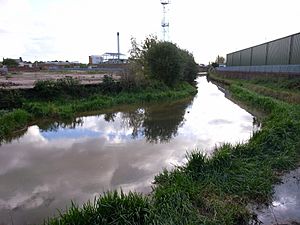 The remains of the canal east of Ryders Green Junction 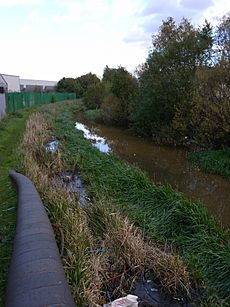 This part of the canal is now only open to boat traffic as far as the Black Country Spine Road, following the decision to build a new bridge which didn't allow enough headroom for boats to pass. In practice, even this section is badly overgrown and unlikely to be navigable throughout. The Wednesbury Canal is dry from this point, but the Ridgacre Branch continues, watered for most of its original length (without its branches) past the culverted road and, although inaccessible to boats, is now used for fishing, walking and is a valued wildlife habitat.

Some modern sources mark the Ridgacre as starting at Ryder's Green Junction but this is not historically correct.

The Wednesbury Canal was part of the first phase of the Birmingham Canal (the first around the Black Country or Birmingham).

It started at what is now Spon Lane Junction (Wolverhampton Level) and descended the three remaining Spon Lane locks to the Birmingham Level. Its length was 4.4 miles (7.1 km). It terminated at Balls Hill Basin, not far from the later Tame Valley Canal.

The Ridgacre Branch opened in 1826 and was 0.75 miles (1.21 km) in length. It ran from the Wednesbury at Swan Bridge Junction, a short distance north of the New Swan Lane / Black Country New Road roundabout. From it ran the Dartmouth Branch northwards and the Halford Branch southwards to collieries.

The Wednesbury Old Canal was given abandoned status by 1955 and 1960 Acts. Recent road developments (Black Country New Road) at Swan Bridge Junction have severed the connection to the remaining, navigable canal, and have also severed the Ridgacre Branch from the canal network.

All content from Kiddle encyclopedia articles (including the article images and facts) can be freely used under Attribution-ShareAlike license, unless stated otherwise. Cite this article:
Wednesbury Old Canal Facts for Kids. Kiddle Encyclopedia.