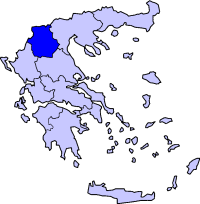 West Macedonia is one of the thirteen peripheries of Greece. It is also one of the 3 parts of the region of Macedonia and particularly the western. It contains 4 perfectures: Florina, Kozani, Kastoria and Grevena. It borders with Thessaly and Epirus to the west and Central Macedonia to the east. It also borders with two countries in the north: Albania and North Macedonia. It has a total population of 303,857 inhabitants according to the 2001 census. Its capital and biggest city is Kozani.

All content from Kiddle encyclopedia articles (including the article images and facts) can be freely used under Attribution-ShareAlike license, unless stated otherwise. Cite this article:
West Macedonia Facts for Kids. Kiddle Encyclopedia.