Kozani is a city in northern Greece, capital of Kozani regional unit and of West Macedonia region. It is located in the western part of Macedonia, in the northern part of the Aliakmonas river valley.

The city lies 710 metres (2,329 feet) above sea level, 15 kilometres (9 miles) northwest of the artificial lake Polyfytos, south-west of Thessaloniki. The population of the Kozani municipality is over 70,000 people. The climate of the area is continental with cold and dry winters, and hot summers.

Kozani is the home of the Technological Educational Institute of Western Macedonia and the University of Western Macedonia, with about 15,000 students from all over Greece and other places. It is also the seat of West Macedonia's court of appeal, police department, fire brigade, the seat of the 1st Army Corps of the Hellenic Army and of the Bishop of Servia and Kozani.

One of the most important aspects of local folklore is Kozani's carnival at the end of the winter. Kozani is renowned in Greece and abroad for the production of Saffron in the nearby town of Krokos.

Kozani is a transport node between Central Macedonia, Thessaly and Epirus. The nearest airport is Filippos Airport. The airport was first opened in the mid-20th century. Kozani is situated near the Egnatia Highway, which connects the coast of the Ionian Sea with Thessaloniki and Turkish borders. 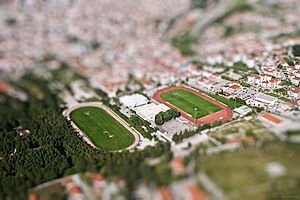 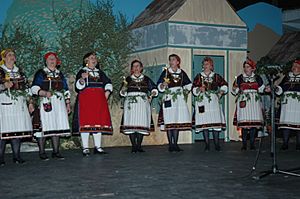 Women from Kozani in costumes

Kozani carnival is one of the most important events in the region, taking place the end of the winter. The most interesting local celebration during the carnival are the Fanoi (great bonfires), which are lit in the squares of Kozani. Around them, people sing and dance. All celebrations become more exciting on the Sunday of the last week, after the carnival parade, when bonfires are lit all over the town which burn until the early morning hours.

At the end of summer Lassaneia Events are organised. They consist of theatrical representations, concerts, athletic events etc. The name "Lassaneia" comes from Georgios Lassanis, who was from Kozani and participated in the Greek War of Independence. 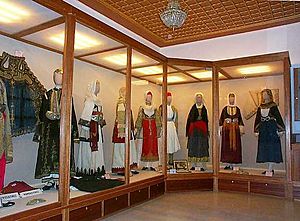 Traditional costumes from all over Greece - Natural History Museum, Kozani

Niaimeros is a fair in the north of the city in the Niaimeros place. It takes place on the first Tuesday of October. It used to last 9 days (niaimeros = nine days), but now it lasts only 3 days.

Official local public holidays are the celebration for the liberation of the city from the Turks on 11 October and Saint Nicolas day - Kozani's patron - on 6 December.

The municipal Band is named Pandora. It was founded in 1902, and it takes part in all the events and celebrations. 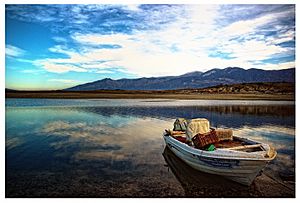 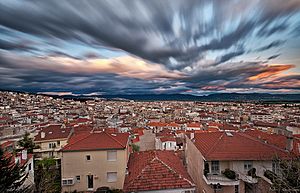 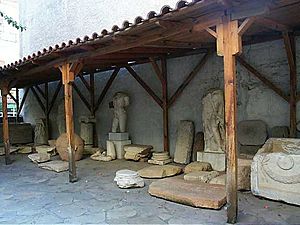 Exhibits at the yard from the Archaeological Museum, Kozani

A typical dish in Kozani is the so-called Giaprakia. The main ingredients are meat and rice in salty carbage-leaf, having the shape of an egg. It is used often as Christmas food. Kichi (Kozanitiko kichi) is called another local dish, which is actually a cheese pie with circular-snail form.

All content from Kiddle encyclopedia articles (including the article images and facts) can be freely used under Attribution-ShareAlike license, unless stated otherwise. Cite this article:
Kozani Facts for Kids. Kiddle Encyclopedia.