West Point (sometimes shown as Westpoint) is an unincorporated community in Wayne Township, Tippecanoe County, Indiana, United States. The population was 594 at the 2010 census.

The community is part of the Lafayette, Indiana Metropolitan Statistical Area. 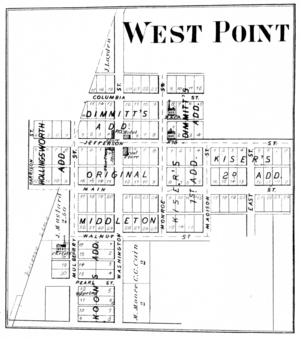 A village named Glen Hall existed on the north side of West Point in the 19th century; though still populated, the site is now generally considered part of West Point. Additionally, residents of the former town of Granville are listed using West Point addresses.

The town was platted in 1833 by Samuel Kiser. It was founded as Middleton, but residents changed the name of the town to West Point.

The West Point post office has been in operation since 1836.

West Point is home to one church, West Point United Methodist. Another church was closed and converted to an antiques shop in the early 2010s.

There are several cemeteries and gravesites within the area. West Point Cemetery is the only one mainly located in the town.

All content from Kiddle encyclopedia articles (including the article images and facts) can be freely used under Attribution-ShareAlike license, unless stated otherwise. Cite this article:
West Point, Indiana Facts for Kids. Kiddle Encyclopedia.