The Town of Rush is a suburb of Rochester located in the southern part of the county.

The Town of Rush was established in 1818 from what was then Genesee County. It was either named after the rushes growing along the creek, or after Dr. Benjamin Rush, Founding Father of the United States.

There were 1,268 households out of which 32.3% had children under the age of 18 living with them, 68.8% were married couples living together, 6.4% had a female householder with no husband present, and 21.5% were non-families. 15.9% of all households were made up of individuals and 5.9% had someone living alone who was 65 years of age or older. The average household size was 2.62 and the average family size was 2.94. 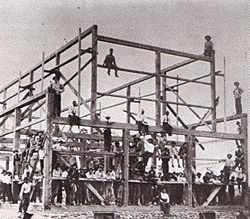 The Rochester & Genesee Valley Railroad Museum on NY 251 in Industry preserves local railroad heritage and is connected by a very short-line railroad to the New York Museum of Transportation around the corner on East River Road.

Communities and locations in Rush

All content from Kiddle encyclopedia articles (including the article images and facts) can be freely used under Attribution-ShareAlike license, unless stated otherwise. Cite this article:
Rush, New York Facts for Kids. Kiddle Encyclopedia.