Avon is a town in Livingston County, New York, United States. The town is bordered on the north by the town of Rush, New York in Monroe County. Avon is south of Rochester. The population was 7,146 at the 2010 census. The town is named after the river Avon. The town has a village within it also called Avon.

After the Iroquois title to the land was extinguished in 1788 with the Phelps and Gorham Purchase, white settlement of the area around what would be Avon began. In 1789, Dr. Timothy Hosmer, Maj. Isaiah Thompson, William Wadsworth, and others from Hartford, Connecticut purchased a tract east of the Genesee River and named it Hartford after their homeland. The town's name was changed to Avon in 1808 to avoid confusion with another Hartford in Washington County. In 1818, part of the town was removed to form the new town of Rush. County lines shifted as well, Avon and Rush both being part of Ontario County until the formation of Livingston County and Monroe County) in 1821.

The first permanent settler of Avon was Gilbert Berry in 1789, who operated a tavern and a rope ferry on the east bank of the Genesee River until his death in 1797. His widow Maria Berry continued hospitably serving travelers in the inn until about 1812. Other firsts of Avon include the first gristmill built by Capt. John Ganson in northwest Avon in 1789 and the first sawmill in 1797 on the Conesus Outlet built by Dr. Hosmer.

Mineral springs were an important resource of the early town. Beginning in the 1820s, people became interested in water as a therapy for all sorts of maladies, and mineral waters in particular for their reputed health benefits and even as cures. Avon, redolent in natural springs, soon became extremely popular with the afflicted. The wealthy, too, seeking relaxation and leisure, flocked to the town from far and wide. Numerous hotels and spas sprang up to take advantage of this fad, and bottling companies packaged the mineral water for sale. By the late 1890s to early 1900s, most of the hotels that had not closed due to the decline of the spa era had succumbed to fire or were soon razed.

Some popular points of historic interest in Avon include:

The north town line is the border of Monroe County. The Genesee River defines the west town line, flowing past Avon village. Conesus Creek flowing from Conesus Lake flows into the Genesee west of Avon village.

There were 2,525 households out of which 33.0% had children under the age of 18 living with them, 55.1% were married couples living together, 9.8% had a female householder with no husband present, and 31.4% were non-families. 25.9% of all households were made up of individuals and 10.3% had someone living alone who was 65 years of age or older. The average household size was 2.52 and the average family size was 3.05.

Communities and locations in the Town of Avon 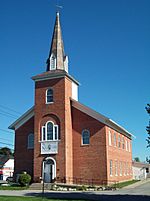 All content from Kiddle encyclopedia articles (including the article images and facts) can be freely used under Attribution-ShareAlike license, unless stated otherwise. Cite this article:
Avon, New York Facts for Kids. Kiddle Encyclopedia.