An aerial view of Conesus Lake.

In August 2006, the New York State Department of Environmental Conservation confirmed that the lake was the first outside the contiguous Great Lakes waterways to be stricken with a new strain of viral hemorrhagic septicemia (VHS), an infectious fish disease responsible for mass die-offs of many species, but not linked to any human health concerns. The disease is spread between waterways through live or frozen bait fish, roe, contaminated fishing equipment or live water wells in boats.

The first steamboat on Conesus Lake was named the "Jessie" launched July 1, 1874, after the Civil War. 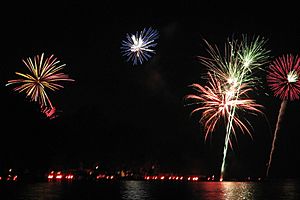 Fireworks during the Lake of Fire. The red lights at the bottom are flares.

On July 3 of each year, the residents of the lake participate in a tradition called the "Ring of Fire", sponsored by the Conesus Lake Association. Participants light road flares around the lake and shoot off fireworks. The festivities typically start at dusk, with approximately 10,000 flares lit at 10:00 PM.

When frozen over in the winter, Conesus Lake is used for snowmobiling and ice fishing.

All content from Kiddle encyclopedia articles (including the article images and facts) can be freely used under Attribution-ShareAlike license, unless stated otherwise. Cite this article:
Conesus Lake Facts for Kids. Kiddle Encyclopedia.