Conesus is a town in Livingston County, New York (NY), United States. The population was 2,473 at the 2010 census. The name is derived from a native word meaning "Berry place."

The Town of Conesus is on the county's east border, and is north of Dansville, NY.

Settlement began around 1795. In 1819, Conesus was formed from parts of the Towns of Groveland and Livonia as the "Town of Freeport." The name was changed to "Browersville" in March, 1825 and was changed to "Conesus" a month later.

Conesus Lake is on the west border of the town, and Hemlock Lake is on the east border of the town. Both lakes are considered minor Finger Lakes. The east town line is the border of Ontario County. The shore of Conesus Lake is a shallow gradient, so many communities are located by Conesus Lake. None are located at Hemlock Lake because the City of Rochester owns the lake and much of the surrounding property. The lake is used for the City of Rochester's water supply. 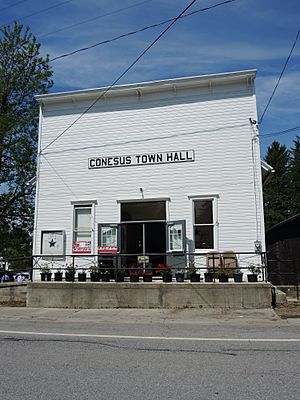 There were 869 households out of which 38.7% had children under the age of 18 living with them, 63.6% were married couples living together, 7.9% had a female householder with no husband present, and 23.8% were non-families. 18.2% of all households were made up of individuals and 7.1% had someone living alone who was 65 years of age or older. The average household size was 2.69 and the average family size was 3.05.

Communities and locations in Conesus

All content from Kiddle encyclopedia articles (including the article images and facts) can be freely used under Attribution-ShareAlike license, unless stated otherwise. Cite this article:
Conesus, New York Facts for Kids. Kiddle Encyclopedia.