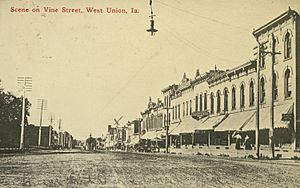 West Union is a city in Fayette County, Iowa, United States. The population was 2,490 at the time of the 2020 census. It is the county seat of Fayette County.

Originally called Knob Prairie, it was founded by William Wells, naming it for his hometown, also called West Union, in Ohio.

According to the United States Census Bureau, the city has a total area of 2.78 square miles (7.20 km2), all of it land.

West Union is the home of the North Fayette Valley Community School District, which comprises the communities of West Union; Clermont; Elgin; Wadena; Hawkeye; Fayette, the unincorporated town of Alpha and the surrounding rural areas. North Fayette and Valley Community Schools combined services in 2013 with the high school in West Union and the middle school in Elgin. The new school's mascot is called the Tigerhawks, due to the merging of the schools mascots, the Valley Tigers and the North Fayette Hawks. This agreement came about as a result of low enrollment and less state aid. This agreement will last until the 2015-2016 school year, unless the two districts' school boards decide to end it early. At the end of the 2015-16 school year, the school boards can decide to either: continue the whole-grade sharing agreement, end the agreement and go back to the North Fayette and Valley school districts, or officially consolidate the two districts.

There were 5,106 households, of which 24.7% had children under the age of 18 living with them, 45.0% were married couples living together, 8.2% had a female householder with no husband present, 3.3% had a male householder with no wife present, and 43.4% were non-families. 38.2% of all households were made up of individuals, and 16.9% had someone living alone who was 65 years of age or older. The average household size was 2.12 and the average family size was 2.80.

All content from Kiddle encyclopedia articles (including the article images and facts) can be freely used under Attribution-ShareAlike license, unless stated otherwise. Cite this article:
West Union, Iowa Facts for Kids. Kiddle Encyclopedia.