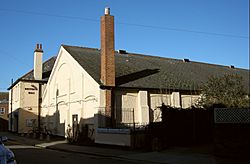 Westgate Hall is a hundred-year-old drill hall and community space in a Conservation area of Canterbury, Kent, notable for being the subject of extended public controversy since October 2009, when the City of Canterbury budget 2010−2011 threatened to have the building demolished. The building is now leased by Curzon Cinemas. 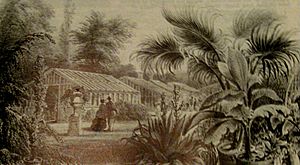 Masters' Exotic Nursery was on the site until 1896

In 1874 on the site of the present hall there was Welby Square and a large, laid-out garden stretching back to St Peter's Lane where the gardener's cottage remains today. It was called Masters’ Exotic Nursery: an exotic garden with two springs giving chalybeate and mineral water and a very tall Lombardy poplar 16 ft (4.9 m) in girth at base. It can be seen on the 1874 map below. The nursery, which stretched northward from Welby Square, belonged to the Masters family and occupied 30 acres (120,000 m2) of land. The gardens were dismantled and sold in 1896, and the last owner of the nursery was George Mount. The square was replaced by Westgate Lane; West Gate Hall and a car park are now on the site of the garden. 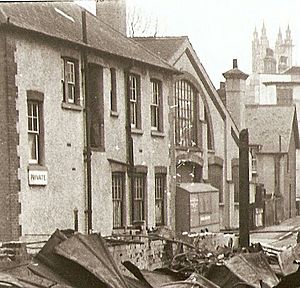 1899 maps do not yet show the hall in Welby Square, but a panorama photo taken in 1900 does show it, so the hall was probably built between 1899 and 1900. It is not known for what purpose it was built, but St Peter's Mission Hall is mentioned as being in Welby square in the early days of the hall. It was used as a drill hall for the Territorials during World War I, and survived the 1944 bombing of Canterbury in World War II. It appears in a cityscape photograph taken in 1900. The hall was originally built expensively with a fancy tiled roof and large windows at each end, with a stained-glass panel in the top window at the Westgate Hall Lane end. The Victorian building next door was later knocked through between the wars and the foyer given Art Deco fittings. This building is now in a Conservation area, and a project exists to record all drill halls before they are lost to redevelopment. 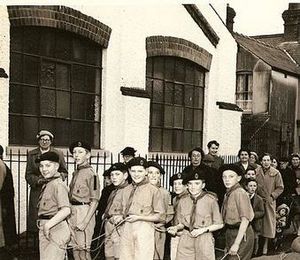 Part of the hall frontage in 1955, showing original windows

It was probably the local Rifle Volunteers' meeting place before its winding-up and amalgamation into the Territorial Force in 1908. The hall was 4th Battalion, the Buffs' (A or B Company) drill hall from its inception as a Territorial battalion in 1908, and they were still there in 1913. An old photo shows army recruits marching outside the hall in 1915, when it was described as a drill hall. In 1915 the Drill Hall was the base for the 4th and 5th Battalions of the Buffs and the REK (Royal East Kent) Mounted Rifles. In 1937 The Territorial Drill Hall was still the base for the 4th Battalion of the Buffs and the Duke of Connaught's Own Yeomanry RA385: a territorial artillery unit. Residents would see battalions marching through the building from one end to the other. The hall was used as a hospital during World War II. A photograph exists of Field Marshal Montgomery visiting the hall in 1948, after which the Buffs moved to the Leros. At some point after 1937 it was called the Territorial Drill Hall. It was called the Drill Hall between World War II and the 1970s. The hall was taken over by the Council in the early 1970s. 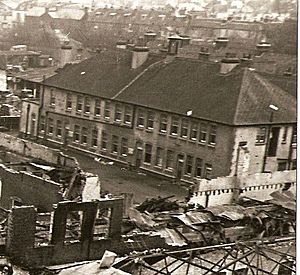 Westgate Hall 1944, showing original Victorian design of what is now foyer and offices section of hall

It may have been called St Peter's Mission Hall as early as 1903, as there was a hall of that name in Welby Square, but no drill hall is mentioned in trade directories. It was one of the conference halls used by the Mothers’ Union in 1927. Probably during its early years until 1914, and since the early 1970s, it has been a community centre. Along with the Beehive, the hall was the background to the beginning of the current Canterbury music scene. The first regular music group to play here was the Wilde Flowers.

It is now a dance hall with sprung floor used by the people of Canterbury and by students from the University of Kent and Canterbury Christ Church University. It has a bar open eleven hours a week, is used for events and fairs, for ballroom dancing and as a conference venue, and accommodates hundreds of people. Local clubs and societies use the hall. The University of Kent uses the hall for the collection of robes on graduation days. This is also a venue for serious events such as Holocaust Memorial Day. The Council itself uses the Westgate Hall to count votes, and sports events such as 2007 Tour de France finish stages at the hall. Blood donor sessions are held here, besides Weight Watchers, gigs and wedding receptions. National Childbirth Trust hold their nearly-new sales in the hall twice a year. The Canterbury Postcard and Collectors Fair is held there every two months, and the Canterbury Antiques and Collectors fair takes place there on most of the Saturdays when the hall is not used for anything else.

Reminiscences of the hall

"Canterbury was lucky then in that it had a number of halls suitable for public dances . . . I used to go to several dances: in the Drill Hall in St. Peter’s Lane, and the Oddfellows Hall in Orange Street; the Forresters’ Hall in High Street. Entrance fee was about a shilling, I think. The Drill Hall used to be non-stop. We had a band at each end and it was from 8 to 1 am in the morning. One and sixpence. Strict tempo, waltz, valeta, quick-step. If you went on the floor and you weren’t complying with the music the M.C. would ask you to leave the floor. There was a place for refreshments and a bar upstairs. You could take a girl to a dance, buy refreshments, buy a packet of cigarettes and a tube of Parma Violet Cashews and have change the next morning out of ten shillings." Howard, born 1903.

In February 2014, City of Canterbury council, Curzon Cinemas and the Westgate Community Trust signed a 99-year lease transferring the Hall to the Trust, and the building is scheduled to re-open in November 2014. The Department for Communities and Local Government community assets fund has awarded a grant of £344,497 to the Trust. As of January 2014 the building is closed for renovation as a cinema with a hall for community use.

All content from Kiddle encyclopedia articles (including the article images and facts) can be freely used under Attribution-ShareAlike license, unless stated otherwise. Cite this article:
Westgate Hall, Canterbury Facts for Kids. Kiddle Encyclopedia.