It was founded in 1931 by Lawrence Langner, a New York theater producer. Langner remodeled an 1830s tannery with a Broadway-quality stage.

The building that now houses Westport Country Playhouse was originally constructed in 1835 as a tannery by R&H Haight, owned by Henry Haight. Charles H. Kemper acquired the tannery from Henry Haight's widow in 1866 and subsequently renamed the business C.H. Kemper Co.

In 1930, the former tannery, which had been unused since the 1920s, was purchased for $14,000 by Lawrence Langner. Cleon Throckmorten, a Broadway designer, was commissioned to renovate the interior of the building.

On June 29, 1931, the curtain went up on the first production at the Westport Country Playhouse. The Playhouse quickly became an established stop on the New England "straw hat circuit" of summer stock theaters.

Since the Langners stepped down in 1959, the administration has included James B. McKenzie from 1959 to 2000 and actress Joanne Woodward, Paul Newman's wife, who took over as artistic director in 2000. Newman remained a part-owner of a restaurant next to the theatre until his death in 2008. The Playhouse became a non-profit in 1973.

In 2002 the Westport Country Playhouse transferred its first production to Broadway after more than 35 years.

Recently the theatre saw the world premiere of Thurgood and a revival of Thornton Wilder's Our Town with Paul Newman. Currently under the artistic direction of Mark Lamos, the Playhouse produces new and classic plays for the public.

Campaign for a New Era

The Campaign for a New Era was the fundraising effort by the Westport Country Playhouse to help pay for its $30.6 million, 18-month renovation from 2003 to 2005. Donations of more than $1,000 are recognized within the Westport Country Playhouse's lobby and production programs. Some of the largest donations came from the State of Connecticut, the Devlin Foundation, the Lucille Lortel Foundation, Elisabeth & Stanley Morten, and Joanne Woodward & Paul Newman.

Woodward and executive director Alison Harris led a $30.6 million renovation, transforming the old barn into a modern, year-round theatre facility. The renovated theatre reopened in 2005. At Woodward's suggestion, a piece of the original stage floor was placed at the dressing room entrance to give a little extra luck to the actors. Woodward stepped down from her job in January 2006, and was followed by actor, opera and theatre director, and playwright Tazewell Thompson. However, Woodward and Newman have both continued to contribute to the Westport Country Playhouse's "Campaign for a New Era."

The Westport Country Playhouse currently has a total of 578 seats. This is the seating capacity before the renovation. The seats are now individual and cushioned, as opposed to the former wooden pews, while retaining the historic look of the former pews. Further, fewer of the current seats are considered "limited view" since the renovation.

The 578 seats are distributed as follows:

Several seats in both the orchestra and mezzanine can be removed or modified to be wheelchair accessible. 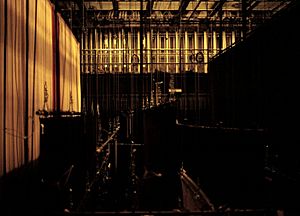 Of the hundreds of interns and apprentices who have passed through the Playhouse's educational programs, several have gone on to attain notoriety. Some graduates include Stephen Sondheim, Frank Perry, Tammy Grimes, Sally Jessy Raphael, Mary Rodgers, and Christina Crawford. A large number of Playhouse interns and apprentices have made careers in the theatre or in related activities.

The program is named in honor of Joanne Woodward, co-artistic director. The Westport Country Playhouse provides summer and school year internships to students ages 19 and older from around the country.

The interns are entrusted with considerable responsibilities and treated as staff members while they engage in an intensive learning experience. Each intern is hired for a specific position, but are expected to work as a team and pitch in where necessary, including, but not limited to, running crew, ushering, concessions and parking.

Applicants must be serious minded, highly motivated and able to commit a minimum of twelve weeks, with long working hours as many as 7 days a week. Applicants should be college students, graduate students or recent graduates, with basic training and experience in theatre already completed, prepared to take the next step towards a professional theatre career. 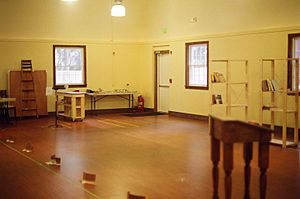 The rehearsal room of the Playhouse

The Westport Country Playhouse has a counterweight fly system currently employing 22 battens, with space for future installations. The height from the stage to the grid is 40 feet (12.19m), with an effective fly range from 3 feet 10 inches (1.17m) to 38 feet (11.58m). Each arbor is 6 feet tall with a capacity for 1200 pounds (544 kg). The locking rail is on the stage right wall, and the loading bridge is 32 feet 3 inches (9.83m) above the stage floor.

Although the fly system and grid are designed for loads to be hung parallel to the proscenium, smaller loads can be hung perpendicular using cables independent of the actual arbor system. These have to be flown in and out manually from the grid, so perpendicularly hung loads are generally stationary during performances. 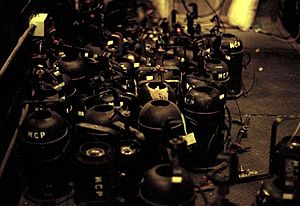 Some stage lighting instruments of the Playhouse

Lighting is controlled from a Strand 520 console in a control booth at the back of the house. For technical rehearsals, a control position can be set up in the center of the theatre.

All content from Kiddle encyclopedia articles (including the article images and facts) can be freely used under Attribution-ShareAlike license, unless stated otherwise. Cite this article:
Westport Country Playhouse Facts for Kids. Kiddle Encyclopedia.