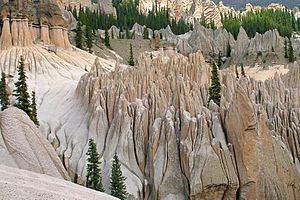 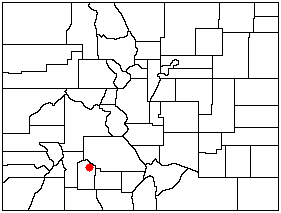 The Wheeler Geologic Area is a highly eroded outcropping of layers of volcanic ash, in the La Garita Mountains of Mineral County, in southern Colorado in the western United States about 10 miles east north-east of Creede. The ash is the result of eruptions from the La Garita Caldera approximately 25 million years ago.

The area was designated a National Monument from 1908 until 1950 and was Colorado's first National Monument. It is now part of the La Garita Wilderness and administered by the Rio Grande National Forest. Lying just below the crest of the range at an elevation of 11,960 feet (3645 m), it can be reached by an 8.4-mile hike on the East Bellows Trail (FS790), or by a difficult 14 mile four-wheel drive road.

The formations are named after Captain George M. Wheeler, who explored and surveyed this area in 1874 for the U.S. Army.

All content from Kiddle encyclopedia articles (including the article images and facts) can be freely used under Attribution-ShareAlike license, unless stated otherwise. Cite this article:
Wheeler Geologic Area Facts for Kids. Kiddle Encyclopedia.