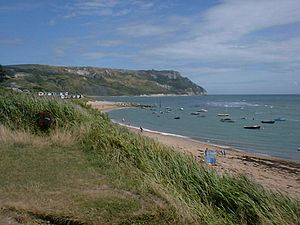 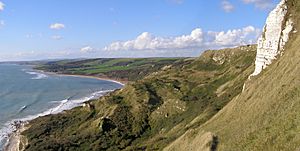 White Nothe undercliff and Ringstead Bay from the Smugglers Path.

White Nothe (meaning "White Nose") is a chalk headland on the English Channel coast at the eastern end of Ringstead Bay, east of Weymouth in Dorset, England. The area is well known for its geology and fossils. Its flanks are the result of prehistoric landslides and the inaccessible slopes of the undercliff provide a secluded wildlife habitat.

A zigzag path up the cliff is believed to be one of the locations alluded to as a smuggler's path in the British children's book Moonfleet by J. Meade Falkner. It is possible to walk to the base of White Nothe along the shore from Ringstead Bay, but it is cut off at high tide, so much care should be taken. At the top of the Smugglers path there is a protruding nose shape coming out of the white cliff giving the name to the area.

The area is partly owned by the National Trust. From the top of White Nothe, to the east, the chalk headland of Bat's Head can be viewed. It is possible to walk east along a clifftop path below the summit of Chaldon Hill to Durdle Door and Lulworth Cove. The Isle of Portland can be seen to the southwest across the sea.

Immediately to the northwest of White Nothe is the Burning Cliff, which from 1826 smouldered with an underground fire for several years due to the bituminous shale.

Situated at the top of White Nothe is a World War II pillbox, constructed in 1940–41 of brick and concrete, as part of the anti-invasion measures. Unusually, the structure is also fitted with a Royal Observer Corps observation post built on top, which was to spot and report aircraft.

All content from Kiddle encyclopedia articles (including the article images and facts) can be freely used under Attribution-ShareAlike license, unless stated otherwise. Cite this article:
White Nothe Facts for Kids. Kiddle Encyclopedia.