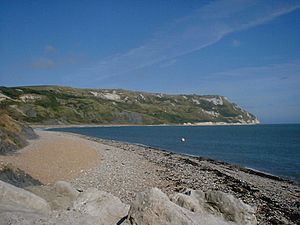 Ringstead Bay with White Nothe to the east in the background. 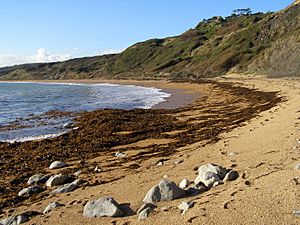 The east end of the beach at Ringstead Bay.

Ringstead Bay and the small village of Ringstead are located on the coast in Dorset, southern England. The area lies on the Jurassic Coast and is known for its natural environment and fossils.

Ringstead Bay has a pebble and shingle beach with some sand. There are offshore reefs approximately 0.6 kilometres (0.37 mi) in length at the western end opposite the village that are uncovered at low tide. This forms is intertidal zone between the low cliffs to the north and the English Channel to the south.

The original medieval village and church at Ringstead, located in a field to the east of the current settlement and mentioned in the Domesday Book, no longer exists. It was most likely abandoned after the arrival of the Black Death at Weymouth in 1348.

The small village of Osmington Mills lies on the coast about 1.5 kilometres (0.93 mi) to the west and there is a footpath along the cliffs, via Bran Point. Perry Ledge is a reef off the beach near Bran Point. The large town of Weymouth is situated approximately 8 kilometres (5 mi) west of Ringstead Bay.

Ringstead also has a nudist beach that is a 20-minutes walk east of the main beach.

Ringstead Bay is accessible by way of a private road with a car park at the end near the sea. There is an alternative free car park in the National Trust area further inland, with footpath access to the sea via a 15–20 minute walk.

All content from Kiddle encyclopedia articles (including the article images and facts) can be freely used under Attribution-ShareAlike license, unless stated otherwise. Cite this article:
Ringstead Bay Facts for Kids. Kiddle Encyclopedia.