Whitechurch (Irish: Teampaill Ghil), on the south side of Dublin, situated south of Ballyboden in Rathfarnham at the foot of the Dublin mountains, derives its name from a small white church in Kilmashogue, built near an ancient cairn (which is a protected monument). Little remains of the church. The Church of Ireland parish of Whitechurch includes most of Rathfarnham including Tibradden, Larch Hill and Kilmashogue. There is a Moravian cemetery in the area which was the burial ground for the Moravian community, a Protestant sect from what is now the Czech republic who arrived in Ireland in the 18th century. This community had a church in Kevin St but have now died out. The Catholic order Augustinian Fathers have been in the area for many years. 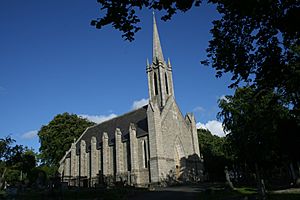 All content from Kiddle encyclopedia articles (including the article images and facts) can be freely used under Attribution-ShareAlike license, unless stated otherwise. Cite this article:
Whitechurch, County Dublin Facts for Kids. Kiddle Encyclopedia.