Since the 1980s, the forest service has tried to restrict access to the Courthouse and has allowed the foot trail to it to grow over because of dangers such as strong winds. They also did not want accidents from paragliding and similar activities taking place from the mountain top or from the Courthouse. There is also an overhang, a small platform less than 7 feet in diameter, connected to Whiteside as if it were a cantilever. Similar overhangs can be found on the Appalachian Trail. 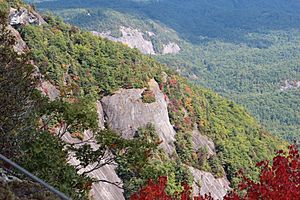 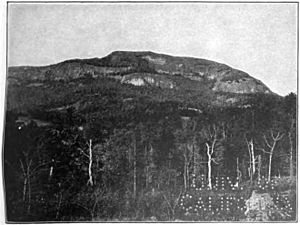 The Cherokee name for Whiteside mountain is Sanigilâ'gĭ.

Cherokee myth says that Spear-finger, the powerful woman monster, built a bridge from the Hiwassee River to Whiteside Mountain.

The overhanging edge has a message carved into it, which reads that Hernando de Soto was there and that it was carved by his men who allegedly threw over their sick, crippled horses there. However, it is likely a hoax carved by some boys sometime in 1926 when there was probably much more of the overhang than there is today. Since the terrain is too rough for men and horses to get through, for De Soto to have come through here at a time when there were no roads or pathways is unlikely. De Soto's route most likely took him through the Cumberland Gap from South Carolina.

All content from Kiddle encyclopedia articles (including the article images and facts) can be freely used under Attribution-ShareAlike license, unless stated otherwise. Cite this article:
Whiteside Mountain Facts for Kids. Kiddle Encyclopedia.