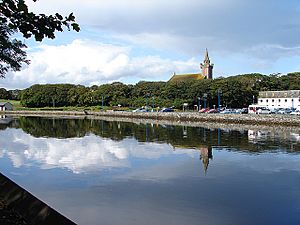 The Wick River in Wick.

Wick River, known also as River Wick, is a river in Caithness in Highland, Scotland. It has its source at the confluence of Scouthal Burn and Strath Burn near Achingale Mill at the northern end of Bardarclay Moss in the Flow Country. The river estuary , is in the North Sea bay of Wick and is straddled by the town of Wick. The source is at a height of about 25 metres, about 11 kilometres west and 2 kilometres north of the estuary.

The river basin includes Loch Watten and Loch Tofingall to the west of the estuary, and Loch Hempriggs and the Loch of Yarrows to the south/southwest.

Viewed upstream from the estuary, the river and its tributaries can be listed as follows:

The Wick River estuary ranges from the vicinity of Wick Harbour to an area about 2.5 kilometres inland .

On both sides of the estuary, areas of Wick are built on artificial embankment which have narrowed the river channel, or have fixed a channel where otherwise the area would be more that of tidal beach.

The river is spanned by one railway, three roads and two footbridges. In order from the sea, they are:

All content from Kiddle encyclopedia articles (including the article images and facts) can be freely used under Attribution-ShareAlike license, unless stated otherwise. Cite this article:
Wick River Facts for Kids. Kiddle Encyclopedia.