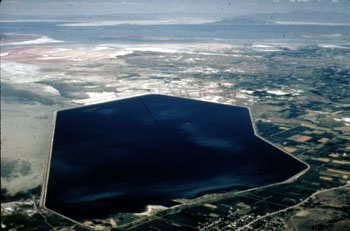 Willard Bay is a man-made fresh water reservoir in the Great Salt Lake, in northern Utah. The bay was separated from the Great Salt Lake in 1964, and has since served as a source of irrigation, drinking water, and recreation for the northern Wasatch Front metro area.

Willard Bay is a 9,900-acre (40 km2) freshwater reservoir located in eastern Box Elder County, Utah, north-west of the city of Ogden, on the north-eastern floodplains of the Great Salt Lake.

The reservoir is operated by the Weber Basin Water Conservancy District and recreation activities are administered by Utah State Parks and Recreation. Fish in Willard Bay include black crappie, walleye, wiper, smallmouth bass, channel catfish, bluegill, and gizzard shad (which are unlawful to possess). At an elevation of about 4,200 feet (1,300 m), the area around Willard Bay features cottonwood and other high desert trees. In winter, the area is a wildlife area for watching nesting eagles. 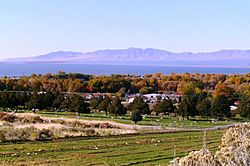 In 1949, U.S. Senator Arthur Vivian Watkins, a Republican from Utah who served from 1946 to 1959, passed through Congress the Weber Basin Project. This project called for the creation of a reservoir to store surplus water from the Ogden and Weber rivers that could later be accessed for use on farmland.

The U.S. Bureau of Reclamation designed and constructed a 36-foot (11 m)-high earth-filled dike to create the 26.4-square-mile (68 km2) enclosure. The dike, which impounds 215,200 acre feet (270 million cubic meters) of water, was completed in 1964 by the W.W. Clyde Company, and was named the Arthur V. Watkins Dam. The resulting reservoir was then drained of salt water and refilled with fresh, directly from the Weber River. The bay was named after the nearby town of Willard, which itself was named after the LDS apostle Willard Richards.

A bill in Congress, H.R. 839 and S. 512, The Arthur V. Watkins Dam Enlargement Act, was introduced in the 2007 session to authorize a feasibility study to enlarge the dam. While the bill passed the House of Representatives, it was suspended in the Senate and never became law. 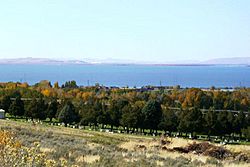 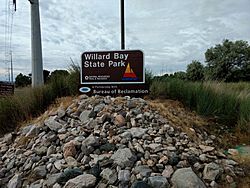 All content from Kiddle encyclopedia articles (including the article images and facts) can be freely used under Attribution-ShareAlike license, unless stated otherwise. Cite this article:
Willard Bay Facts for Kids. Kiddle Encyclopedia.