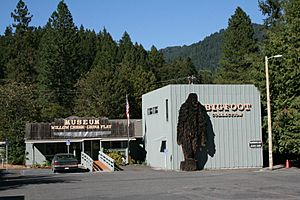 Willow Creek (formerly, China Flat) is a census-designated place (CDP) in Humboldt County, California, United States. The population was 1,710 at the 2010 census, down from 1,743 at the 2000 census. Residents of this small mountain town are commonly referred to as "Willow Creekers." The town is located around 25 miles (40 km) inland from county seat and harbor city Eureka, with the two places vastly differing in climate.

Willow Creek sits along the Trinity River. Willow Creek is described as a “rugged mountain community nestled in the heart of the Six Rivers National Forest.” This area of California is located in the Trinity/Shasta/Cascade Region, near the Oregon border, and is easily reached via State Routes 96 (the "Bigfoot Scenic Byway") and 299.

The town, which is at the intersection of those Routes, is the Bigfoot capital of the world, and holds an annual "Bigfoot Daze" festival in September in honor of the creature, followed by various festivities in a local park. The roadhead of the Bluff Creek / Fish Lake Road, near which many alleged Bigfoot sightings and footprint finds occurred, is about 46 miles northeast, along Route 96. A non-commercial "Willow Creek Bigfoot Landmarks: A Brief Touring Guide, plus BF Odds and Ends" can be viewed online.

The region is the location of the Willow Creek American Viticultural Area. Organic gardens and vineries abound and welcome travelers to try their wares. The upper Trinity River offers a classic Class III river rafting run with moderate rapids, followed by the Burnt Ranch Gorge, which is one of the toughest runs in the entire state.

An Amazon reviewer of the 2013 found-footage horror film, Willow Creek, says, "The endearing quirkiness of the town is captured very well in the iconography, the interviews (particularly with Steven S., the bookstore owner), and the food." The Wikipedia review says, "The two stop off first in Willow Creek ... where various locals talk to Jim's camera, warning them to keep out of the woods, singing ballads about Bigfoot, and generally enjoying their 15 minutes in the spotlight while Jim and Kelly have a blast ...."

Willow Creek was served for many decades by the weekly Klamity Kourier newspaper, which closed in 2006 and was quickly replaced by the Bigfoot Valley News also based in Willow Creek. The Bigfoot Valley News has since closed, but the regional newspaper, Two Rivers Tribune (www.tworiverstribune.com), opened in 1994 and is still going strong. Its news coverage area is from Burnt Ranch all the way to Happy Camp, 97.5 miles (by Routes 299 and 96) to the north.

This region experiences much warmer summers than locations near the coast such as county seat Eureka, but retains high winter rainfall associated with coastal locations. Daytime highs in summer are representative for areas with hot-summer-mediterranean climates, but is moderated by cool nights, causing high so-called diurnal temperature variation. Willow Creek has a hot-summer Mediterranean climate, abbreviated "Csa" on climate maps. Summer highs are extremely hot when compared to areas of the county that are affected by coastal fog.

Willow Creek's first non-indigenous settlers were Chinese laborers from the mining and lumber camps, which earned the town the name China Flat. The China Flat post office opened in 1878, and changed its name to Willow Creek in 1915.

There were 772 households out of which 24.0% had children under the age of 18 living with them, 49.9% were married couples living together, 8.2% had a female householder with no husband present, and 37.6% were non-families. 31.6% of all households were made up of individuals and 11.8% had someone living alone who was 65 years of age or older. The average household size was 2.26 and the average family size was 2.81.

All content from Kiddle encyclopedia articles (including the article images and facts) can be freely used under Attribution-ShareAlike license, unless stated otherwise. Cite this article:
Willow Creek, California Facts for Kids. Kiddle Encyclopedia.