Winter Hill is a neighborhood in Somerville, Massachusetts. It gets its name from the 120-foot hill that occupies its landscape, the name of which dates back to the 18th century. Winter Hill is located roughly north of Medford Street, west of McGrath Highway, and east of Magoun Square. 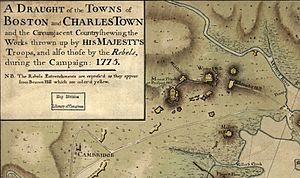 Portion of a map from 1775 highlighting the Winter Hill fortification

An early map of the area (dated 1637) from the papers of the family of John Winthrop includes some of this neighborhood and the adjacent Ten Hills section. A Map of the Battle of Bunker Hill from 1775 displays Winter Hill to the northwest, with woody and marshy regions beyond. A map by Henry Pelham published in 1777 includes the Winter Hill Fort as part of the "Military Works" in the area. The Winter Hill Fort was described as "extensive" among other American Revolutionary War installations, but little evidence of the structural features remains. A "Plan of the Rebels Works" in the Library of Congress collection offers a glimpse of the layout. This stronghold is also diagrammed in a map credited to John Montrésor indicating that this was a part of Charlestown at the time. The "Midnight Ride" of Paul Revere crossed over Winter Hill, and is re-enacted each year as part of the Patriots' Day festivities in the Boston area. 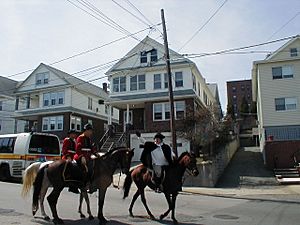 Numerous buildings included in the National Register of Historic Places are found in this neighborhood, including the Adams-Magoun House, the Charles Adams-Woodbury Locke House, the Broadway Winter Hill Congregational Church and the Elisha Hopkins House among others.

An apartment in the Langmaid Terrace building on Winter Hill at 365 Broadway Avenue was the home of Barack Obama between 1988 and 1991 while he was a student at Harvard Law School.

By the 21st century Winter Hill featured a mix of restored homes and aging triple deckers, replete with china gnomes and bathtub Virgin Marys. Once known as the home base of Irish gangsters Whitey Bulger, James "Buddy" McLean, Howie Winter and the notorious Winter Hill Gang, Winter Hill is now, like much of the rest of Somerville, experiencing gentrification and a resulting rise in property values and rents. Despite these changes, the area continues to hang onto its neighborhood flavor and is home to a large community of Irish and Italian people.

Winter Hill is home to a variety of eateries, Mama Lisa's and Leone's pizza establishments, the Winter Hill Bakery, and Maria's Italian Cold Cuts. A number of new restaurants, cafes, and shops are in the late planning stages. The Theater Coop, one of the Boston area's few new repertory live theaters, is located between Foss Park and the local supermarket. Near Winter Hill in East Somerville is a community pottery studio, called Mudflat, and a collective of stained glass artists called Daniel Maher Stained Glass.

Foss Park abuts Interstate 93 at the base of Winter Hill. The park has a large, colorful mural painted behind the public swimming pool, and is home to a wide variety of sporting matches, especially soccer. At one time a portion of the Middlesex Canal was located on land that became this park.

An extension of the Green Line to the Winter Hill area is currently in planning phases, specifically with stations at Medford Street (Gilman Square) and Lowell Street, though estimated completion has been pushed back to 2020. The route of the Green Line Extension has been broadly defined but not finalized.

All content from Kiddle encyclopedia articles (including the article images and facts) can be freely used under Attribution-ShareAlike license, unless stated otherwise. Cite this article:
Winter Hill, Somerville, Massachusetts Facts for Kids. Kiddle Encyclopedia.