In the early 20th century, H. F. du Pont and his father, Henry Algernon du Pont, designed Winterthur in the spirit of 18th- and 19th-century European country houses. The younger du Pont added to the home many times thereafter, increasing its number of rooms by nearly sixfold. After he established the main building as a public museum in 1951, he moved to a smaller building on the estate.

Initially a collector of European art and decorative arts in the late 1920s, H. F. du Pont became interested in American art and antiques. Subsequently, he became a highly prominent collector of American decorative arts, building on the Winterthur estate to house his collection, conservation laboratories, and administrative offices. The gardens were designed by Marian Cruger Coffin.

The museum has 175 period-room displays and approximately 85,000 objects. Most rooms are open to the public on small, guided tours. The collection spans more than two centuries of American decorative arts, notably from 1640 to 1860, and contains some of the most important pieces of American furniture and fine art. The Winterthur Library includes more than 87,000 volumes and approximately 500,000 manuscripts and images, mostly related to American history, decorative arts, and architecture. The facility also houses extensive conservation, research, and education facilities.

In the 1990s, more informal museum galleries were opened in a new building adjacent to the main house; it features special rotating and permanent exhibits. The museum also is home to the Winterthur Program in American Material Culture and the Winterthur/University of Delaware Art Conservation program.

The museum was named for the estate, itself named after the Swiss city of Winterthur, the ancestral home of Jacques Antoine Bidermann, a son-in-law of Éleuthère Irénée du Pont, the founder of the du Pont family and fortune in the United States. 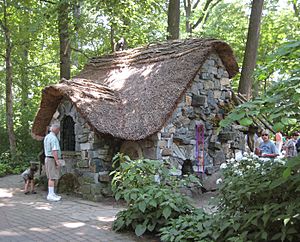 A stone cottage in the "Enchanted Garden" section of the grounds, opened in 2001 and intended for families with children

All content from Kiddle encyclopedia articles (including the article images and facts) can be freely used under Attribution-ShareAlike license, unless stated otherwise. Cite this article:
Winterthur Museum, Garden and Library Facts for Kids. Kiddle Encyclopedia.