Wolterton Hall, is a large country house in the ecclesiastical parish of Wickmere with Wolterton and the civil parish of Wickmere in the English county of Norfolk, England, United Kingdom. The present hall was commissioned by the 1st Lord Walpole of Wolterton and completed in 1742, it was designed by the architect Thomas Ripley who was a protégé of Lord Walpole and his brother Sir Robert Walpole.

The name Wolterton (Ultretune) devolved from the Anglo-Saxon language and has the meaning of Wulfthryth’s (a woman) enclosure (tun or ton) settlement or farm.

The present hall and estate was once occupied by an early manor house, owned by Sir Henry Spelman, and the village of Wolterton which was abandoned leaving only the remains of the parish church tower which stands a short distance north of the present hall. Evidence shown on a map produced in 1733 shows that the deserted settlement of Wolterton lay a little north of the church and consisted of several houses clustered around a village green. The village of Wolterton is mentioned in the Domesday Book where it is listed under the names Ultertuna and Wivetuna. The survey shows main landholder of Wolterton was the Norman nobelman William de Warenne. The listing shows 4 smallholders on the land with ½ a plough team on 16 acres. Land was also held by the Abbot of St. Benedict of Holme before 1066 and was valued at 16 shillings (80p) but at the time of the survey it was valued at 20 shillings (£1). The manor is 6 furlongs in length and 5 in width and had a tax value of 2½d (approx. 1p). The main tenant was Ralph of Beaufour.

Horatio Walpole, 1st Lord Walpole of Wolterton acquired the manor house and estate at Wolterton in 1722 which he decided to renovate. Walpole was the younger brother of Sir Robert Walpole, 1st Earl of Orford, who was a British statesman who is generally regarded as the first Prime Minister of Great Britain. Like his brother, Horatio was also a politician and diplomat, and spend time at the Hague and had also been the Ambassador of France in Paris between 1724 and 1730. Horatio’s plans for the estate were jeopardised in 1724 when a fire swept the house destroying the structure. The architect Thomas Ripley was engaged to advise Walpole on the rebuild required.

Responsibility for the design and construction of the new hall was given to Thomas Ripley. He had previously been engaged by Horatio’s brother Robert Walpole to re-develop the Great House at Houghton. His design was for a neoclassical country house with on rectangular plan over three storeys. The ground floor was faced with Portland stone with the preceding storeys faced in pale red brick which were produced locally. Sash windows were installed surrounded by eared and shouldered stone architraves. The window heads were of plain stone pediments with cornice. The main entrance was on the north elevation of the house was flanked either side with Tuscan columns and headed with a plain stone cornice and pediment and was accessed by means of an exterior staircase (Removed in the 19th century). This entrance is now a window following alterations made in the 19th century. The roof was constructed with Welsh slate. 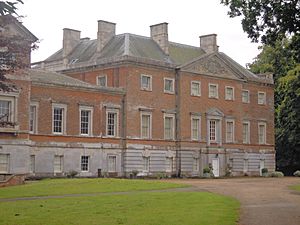 Horatio Walpole, 3rd Earl of Orford the great grandson of Horatio Walpole inherited the hall and he initiated many alterations to it. In 1828 Horatio commissioned the architect George Repton, who was the fourth son of Humphry Repton the landscape designer, to build a new Palladian wing on the east elevation of the hall. This consisted of a two-storey four bay link to a fifth three storey bay creating a pedimented palladian pavilion. He also added the Portland stone arcade to the south elevation which consisted of seven semi-circular arch with a balustrade terrace balcony above. At each end of the arcade he constructed an open staircase which lead from the terrace down to the gardens below.

The interior designs for the hall included a marble hall which was formally the entrance hall before Repton’s alterations to the entrance in 1828. The room has four walnut doors which were a gift of Queen Caroline the wife of George II. The room also contains a fireplace with an overmantel of white marble and coloured agate by Richard Fisher of Ripon. The room has a classical motif stucco ceiling.

Horace Walpole’s study was decorated and designed by Italian painter Jacopo Amigoni in the late-Baroque/Rococo style. Other rooms of the house are also embellished with fire-surrounds by Fisher (eight in total) and many of the walls have family portrait paintings. 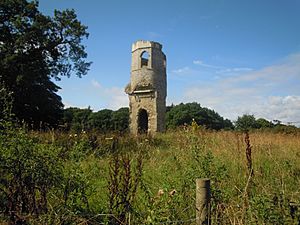 The hall is surrounded by parkland and gardens which were designed and built by the garden designer Charles Bridgeman. His design also included the creation of a lake, from an earlier water feature, in 1725 to the south of the hall. The lake was inhanced in 1830s with the addition of an island which was planted with cedar trees.

The former medieval parish church of St Margaret's is now a ruin with only the round tower standing. Made of knapped flint with brick and stone dressings, it is a Grade II* listed building and a scheduled ancient monument.

The establishment of Norfolk turkeys

In the written memoirs of Lady Dorothy Nevill she recalls in her manuscript Mannington and the Walpoles, Earls of Orford (1894) that her great-grandfather Horatio Walpole, 1st Baron Walpole of Wolterton was given an goodly sinecure by his brother Robert for the sum of £3,000 per annum. This allowed Horatio to acquire hardwood, mainly walnut to make up the doors windows and shutters for the hall. Horatio also imported a quantity of the American turkeys which were kept in the woods around Wolterton and in all probability were the embryo flock for the popular Norfolk turkey breeds of today.

The Walpoles remained in residence at Wolterton until the death of Horatio Walpole, 3rd Earl of Orford in 1858. The 4th Earl also called Horatio went to live at near-by Mannington Hall and Wolterton remained empty until the 1900s. In 1905 restoration work began at the instigation of Robert Horace Walpole, 5th Earl of Orford, who was the nephew of the 4th Earl. He moved back into Wolterton from Mannington and remained there until he died in 1931.

The 7th/9th Baron opened the house up to visits from the general public in 1950.

Disaster struck in 1952 when a fire broke out in one of the bedrooms on the second floor, gutting the whole floor and caused serious water damage to the room below after the fire brigade had successfully put out the fire. The fire brigade, estate workers, neighbours and a group of boys from Old Buckenham Hall preparatory school all worked together to save much of the house's contents, with the fire brigade noted for their courage in retrieving many priceless works of art and furniture from the less accessible area engulfed in the fire.

Lord Walpole began the restoration of the hall soon after the fire and after three years the hall was back open to the public.

In 1989 the hall and estate were inherited by his son the 8th/10th Baron Walpole who made his home at nearby Mannington Hall. He was quoted as saying that he was committed to the conservation of the hall and its estate. Despite this he sold several hundred acres of land in 1999 and put the hall and 500 acres of land on the market for sale in 2015.

The house and parkland were bought by designers Peter Sheppard and Keith Day in April 2016.

All content from Kiddle encyclopedia articles (including the article images and facts) can be freely used under Attribution-ShareAlike license, unless stated otherwise. Cite this article:
Wolterton Hall Facts for Kids. Kiddle Encyclopedia.