Woodbridge is a historic neighborhood of primarily Victorian homes located in Detroit, Michigan. The district was listed on the National Register of Historic Places in 1980, with later boundary increases in 1997 and 2008. In addition to its historic value, Woodbridge is also notable for being an intact neighborhood of turn-of-the-century homes within walking or biking distance of Detroit's Downtown, Midtown, New Center, and Corktown neighborhoods. 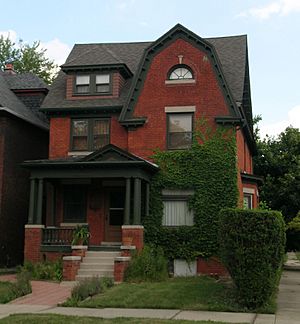 West side of Trumbull between Willis and Alexandrine

The district as recognized by the National Register of Historic Places was originally bounded by Trumbull Street, Calumet Street, Gibson Street, Grand River Avenue, Rosa Parks Boulevard, West Warren Avenue, Wabash Street, Railroad Tracks, and the Edsel Ford Freeway. The boundaries of the District were increased twice: in 1997, 4304-14 Trumbull Street (private residences) and 3800 Grand River Avenue were added to the district, and in 2008 the southeast corner of Trumbull Street and Warren Avenue (Saint Dominic Roman Catholic Church) was added.

Most structures in the district are located on north–south streets. The irregularly-shaped district includes structure at 3800 Grand River Avenue (between Avery Street and Commonwealth Street), and structures within the following boundaries:

Woodbridge is an intact neighborhood of architecturally significant buildings and has had an important effect on the history of Detroit. The neighborhood, dating to the Victorian era, has largely escaped the redevelopment efforts that have obliterated many of Detroit's other historic areas. It is named for William Woodbridge, governor of Michigan in 1840–1, who owned a large farm on which much of the neighborhood was subsequently built.

Most of the structures within the neighborhood were built after 1870, beginning with modest cottages. Larger structures were built later, including the James Scripps house (now demolished and turned into a city park), built in 1879. The Eighth Precinct Police Station, built in 1901, was architecturally designed to blend in with the lavish upper-class homes in the neighborhood. As the automotive industry boomed, there was an increased demand for housing in the city of Detroit, and new buildings and apartment houses were constructed behind and between the existing homes in the neighborhood. During World War II, owners rented rooms and divided homes into apartments to house defense industry workers.

Notable structures within the Woodbridge neighborhood include:

All content from Kiddle encyclopedia articles (including the article images and facts) can be freely used under Attribution-ShareAlike license, unless stated otherwise. Cite this article:
Woodbridge, Detroit Facts for Kids. Kiddle Encyclopedia.