New Center is a prominent commercial and residential historic district located uptown in Detroit, Michigan, adjacent to Midtown, one mile (1.6 km) north of the Cultural Center, and approximately three miles (5 km) north of Downtown. The area is centered just west of the intersection of Woodward Avenue and Grand Boulevard, and is approximately bounded by the Virginia Park Historic District on the north, the Edsel Ford Freeway (I-94) on the south, John R Street on the east and the Lodge Freeway on the west. New Center, and the surrounding areas north of I-94, are often referred to simply as the North End.

The heart of New Center was developed in the 1920s as a business hub that would offer convenient access to both downtown resources and outlying factories. Some historians believe that New Center may be the original edge city—a sub-center remote from, but related to, a main urban core. The descriptor "New Center" derived its name from the New Center News, an automotive-focused free newspaper begun in 1933 that continues to operate under the name Detroit Auto Scene. From 1923 to 1996, General Motors maintained its world headquarters in New Center (in what is now Cadillac Place) before relocating downtown to the Renaissance Center; before becoming a division of GM, Fisher Body was headquartered in the Fisher Building. Both Cadillac Place and the Fisher Building are National Historic Landmarks. In addition to the government and commercial offices along Woodward and Grand Boulevard, New Center contains the Fisher Theatre, the Hotel St. Regis, the Henry Ford Hospital, restaurants, and residential areas. 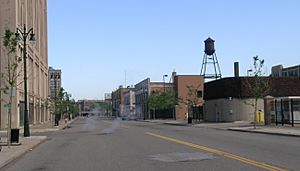 In 1891, Detroit mayor Hazen S. Pingree broke ground on the construction of Grand Boulevard, a ring road that wrapped around the city of Detroit. The Boulevard ran for 12 miles (19 km), curving from the Detroit River on the west to the river on the east and crossing Woodward Avenue at a point approximately 3 miles (4.8 km) from downtown. The Boulevard was originally thought to represent the absolute limit of the city's expansion, although tremendous growth at the beginning of the 20th century quickly pushed the city limits far beyond Grand Boulevard.

In the 1890s, major railroad infrastructure known as the Milwaukee Junction was built just south of Grand Boulevard to facilitate industrial expansion in the city of Detroit. To take advantage of the rail line, industrial plants were built in this area on both sides of Woodward Avenue, with the automotive industry prominently involved. Part of this area east of Woodward is now the Piquette Avenue Industrial Historic District, while the area west of Woodward and south of the railroad tracks is the New Amsterdam Historic District. Most notably, in 1904, Burroughs Adding Machine Company built a large factory on Third, and the following year Cadillac built an assembly plant just to the east of Burroughs.

In 1915, Henry Ford bought the financially struggling Detroit General Hospital and its lands on Grand Boulevard and Hamilton (just west of Woodward) and reopened it as Henry Ford Hospital with 48 beds. Soon after, Ford broke ground on a 50,000-square-foot (4,600 m2) facility at the same location; the larger hospital opened in 1921. 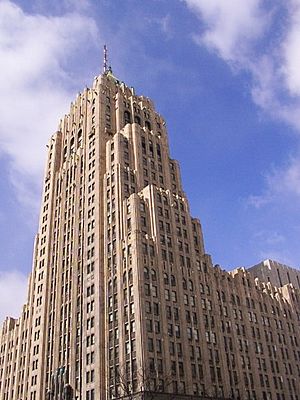 The Fisher Building, which has the headquarters of Detroit Public Schools

In the late 1910s and early 1920s, the automobile industry in Detroit grew rapidly. The economic surge made land in downtown Detroit difficult to obtain. The lack of suitable parcels frustrated William C. Durant in his search for the optimum location for his planned General Motors headquarters. Durant looked to the north, and settled on a location just west of Woodward Avenue on Grand Boulevard. At the time, the area was a residential district of private homes and small apartment buildings. 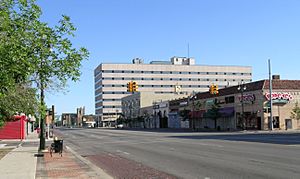 Around the same time, the Fisher Brothers of Fisher Body followed General Motors to the area. They broke ground on their eponymous Fisher Building in 1927, located across Grand Boulevard from the General Motors Building. The Fisher Brothers also hired Kahn, and spared no expense to construct their headquarters building. The followed this up with the construction of New Center Building (now the Albert Kahn Building), completed in 1932. The Great Depression, however, forced the Fishers to break off their plans to construct a complex of buildings in New Center, including a grandiose three-towered version of the Fisher building. In 1940 Saks Fifth Avenue opened their fourth full-line department store in this building. The store closed in 1978 and relocated to Fairlane Town Center in Dearborn. 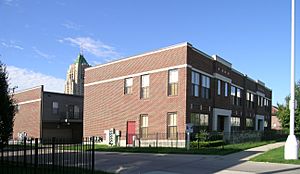 In 1977, General Motors began refurbishing some of the residential neighborhoods north of Grand Boulevard. The result was the "New Center Commons", a collection of refurbished single-family homes on the north side of New Center. With the revitalization of Virginia Park, New Center has two distinct historic residential neighborhhods within its boundaries. General Motors also facilitated the rehabilitation of some multi-family dwellings. In the late 1990s and early 2000s, new townhomes and condominiums were constructed in what had been empty areas of New Center, including a section along Woodward just north of Grand Boulevard. Additional loft renovation (as well as TechTown, the research and business incubator hub) took place at the same time within the New Amsterdam Historic District. 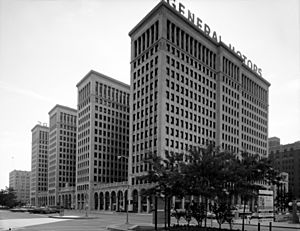 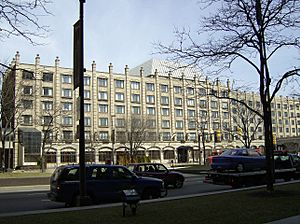 New Center has a retail section, primarily along the Woodward and Grand Boulevard corridors. The Cadillac Place state office complex and the Fisher Building are National Historic Landmarks in the area. An area south of Grand Boulevard along Woodward contains some retail stores in the district which have existed at their present location since the 1920s. The boutique Hotel St. Regis, Detroit is adjacent to the Fisher Theatre. 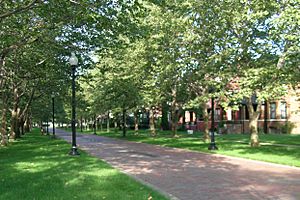 Homes on Pallister, a pedestrian street in this block.

The Consulate-General of Lebanon in Detroit is located in Suite 560 in the New Center One Building. 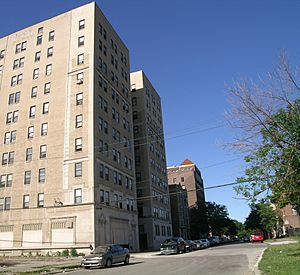 Apartment buildings on Seward on the north side of New Center.

Grand Boulevard, along its entire extent, became an attractive residential address at the beginning of the 20th century. This was also true in the area that was to become New Center. At the turn of the century, a number of private homes were built along Grand Boulevard and in the neighborhoods to the north, notably including what is now the Virginia Park Historic District on the northern edge of New Center. Interspersed in the area were small apartment buildings. Larger apartment buildings were constructed in the area in the 1920s to serve the population of workers and visitors to the area after larger office buildings had been built on Grand Boulevard.

The 2010s have seen a growth of new development in the New Center area. One of the first major projects, begun in 2010, was by the Henry Ford Health System of a $500 million revitalization effort of 300 mostly blighted acres just south of the main hospital campus on the western edge of New Center. The first development on the new South Campus site was the construction of a $30 million, 275,000-square-foot, Medical Distribution Center on 18-acres, built for Cardinal Health, Inc. In 2012, Wayne State University began work on a $92 million, 207,000-square-foot Integrative Biosciences Center (IBio). As many as 500 researchers, and staff will work out of the IBio Center located at 6135 Woodward Avenue. This was followed in 2013 by U-Haul's restoration of the 250,000-square-foot, seven-story historic NBC-Nabisco Building at 899 W. Baltimore St. The building with its distinctive castle like turrets at the four corners of the building's roof was constructed in 1920, and left abandoned for many years. In 2014, the six-story, 64,000-square-foot annex to the Hotel St. Regis was sold, and conversion into a 58-apartment residential building with more than 4,000-square-feet of street level retail space was begun.

In 2015, M-1 Rail reported that its $10.6 million headquarters, operations center, and streetcar maintenance facility, known as the Penske Tech Center, was under construction between E. Bethune and Custer streets along Woodward Avenue in New Center. The exterior of the Center will be made of reddish brick to mimic the historical look and feel of the surrounding neighborhood. In addition, the Fisher Building and adjacent Albert Kahn Building were sold, and the new owners announced only the broad outlines of their redevelopment plans, including the spending of well north of $80 million on the buildings. Finally, Central Detroit Christian Community Development Corporation announced a $10.2 million plan to modernize the four-story, 42,200-square-foot Casamira Apartments at 680 Delaware St., built in 1925.

In 2016, the pace of redevelopment increased. The Henry Ford Health System announced the start of a second development beginning in the spring of 2017 on its evolving 300-acre South Campus site, with the construction of a new $120-$150 million, 187,000-square-foot, six-story, Brigitte Harris Cancer Pavilion, that's scheduled to open in 2019, along with a skywalk across West Grand Boulevard to connect it to the Henry Ford Hospital.

In 2017, the Detroit Pistons and the Henry Ford Health System announced plans to build a new $80-$85 million, 128,000-square-foot, practice, training, and team headquarters building, a dedicated 25,000-square-foot sports medicine building, and a 400-space parking structure, known as the Henry Ford-Detroit Pistons Performance Center. Bounded by Second and Third avenues, Amsterdam Street to the south, and railroad tracks to the north, and located near TechTown. It was also announced that the Center will be available to the public, and the plan is to have it open in time for the 2018-19 NBA season.

All content from Kiddle encyclopedia articles (including the article images and facts) can be freely used under Attribution-ShareAlike license, unless stated otherwise. Cite this article:
New Center, Detroit Facts for Kids. Kiddle Encyclopedia.