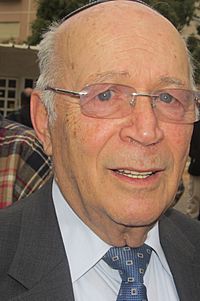 Yehoshua Matza (Hebrew: יהושע מצא, 8 August 1931 – 30 December 2020) was an Israeli politician, economist and businessman. He was president and CEO of State of Israel Bonds. From 1984 to 2002, he was a member of the Likud. From 1996 to 1999, Matza was Minister of Health during the first Benjamin Netanyahu cabinet. Matza was born in Jerusalem.

All content from Kiddle encyclopedia articles (including the article images and facts) can be freely used under Attribution-ShareAlike license, unless stated otherwise. Cite this article:
Yehoshua Matza Facts for Kids. Kiddle Encyclopedia.