Yokine is a suburb of Perth, Western Australia. Its local government area is the City of Stirling.

The name Yokine was derived from the Noongar Aboriginal word meaning native dog. The name was chosen because the area is close to Dog Swamp. Its post code is 6060.

Yokine was part of the grant originally allocated to TRC Walters in 1840. Western Australian Golf Limited owned Yokine from at least 1927 and subdivided a small portion of land near the golf course. Before World War II the only house in Yokine was at the eastern end of Royal Street. Yokine experienced a housing boom after the war and much of the area near the golf course was developed by the early 1950s. The southern area grew rapidly in the 1960s and by the late 1970s Yokine was almost completely developed. 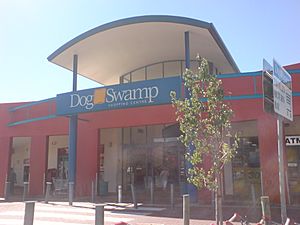 The entrance of the Dog Swamp Shopping Centre.

All content from Kiddle encyclopedia articles (including the article images and facts) can be freely used under Attribution-ShareAlike license, unless stated otherwise. Cite this article:
Yokine, Western Australia Facts for Kids. Kiddle Encyclopedia.