The district was formed on August 1, 2008. This was the result of an administration reform in Saxony. The rural district Zwickau was built up by the Chemnitzer Land Rural District, Zwickauer Land Rural District and the town of Zwickau. The county seat of the district is the biggest city Zwickau. However, the former county seats of the different districts were kept as outpost. Those are namely Glauchau, Limbach-Oberfrohna, Werdau and Hohenstein-Ernstthal.

In July 2008, there were 25,026 people jobless. That means there was a rate of unemployment of 11.1 percent. It was the lowest jobless rate of the Regierungsbezirk Chemnitz. Because of the end of the schoolyear the unemployment rate of pupils rose up.

In the rural district Zwickau is one Study Academy (called: Berufsakademie Glauchau) nine vocational schools and some grammar schools. Overall there are 124 schools. In Chemnitz and Zwickau are different Universities.

The Kreistag was elected on 8 June 2008. The current chief administrative officer of the Zwickau Rural District is Christoph Scheurer. 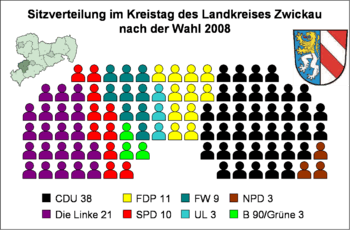 The seating of the Kreistag of the rural district Zwickau after the election from June, 8 2008

All content from Kiddle encyclopedia articles (including the article images and facts) can be freely used under Attribution-ShareAlike license, unless stated otherwise. Cite this article:
Zwickau Rural District Facts for Kids. Kiddle Encyclopedia.