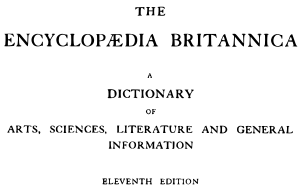 The Encyclopædia Britannica Eleventh Edition (1910–1911) is one the most famous edition of the Encyclopædia Britannica. Some of its articles were written by the best-known scholars of this time. The articles are still of value and interest to modern scholars as examples for the knowledge of the 19th and early 20th centuries. They contain, however, a number of problematic areas for the modern scholar using them as a source. The eleventh edition is no longer restricted by copyright and has become available online, both in its original text and where parts of it have become part of other online encyclopedias and works.

The 1911 eleventh edition was assembled under the leadership of American publisher Horace Everett Hooper, and edited by Hugh Chisholm. American marketing methods assisted sales. Some 11% of the contributors were American, and a New York office was established to run that side of the enterprise.

Some articles were written by the best-known scholars of the day, such as Edmund Gosse, J. B. Bury, Algernon Charles Swinburne, John Muir, Prince Peter Kropotkin, T. H. Huxley, G. K. Chesterton, Edmund Husserl and William Michael Rossetti, and others well known to that era.

The eleventh edition introduced a number of changes to the format of the Britannica. It was the first to be published complete, instead of the previous method of volumes being released as they were ready. The content of the encyclopaedia was made up as follows:

The eleventh edition has become a commonly quoted source because of the reputation of the Britannica at that time and because it is now in the public domain and has been made available on the Internet. The Encyclopædia Britannica of 1911 has been used as a source for many modern projects, such as Wikipedia and the Gutenberg Encyclopedia.

The Project Gutenberg Encyclopedia is actually the eleventh edition of the Encyclopædia Britannica, renamed to address Britannica's trademark concerns.

All content from Kiddle encyclopedia articles (including the article images and facts) can be freely used under Attribution-ShareAlike license, unless stated otherwise. Cite this article:
1911 Encyclopædia Britannica Facts for Kids. Kiddle Encyclopedia.