The 1922 Vallenar earthquake occurred with a moment magnitude of 8.5 in the Atacama Region of Chile, near the border with Argentina on 11 November at 04:32 UTC. It triggered a destructive tsunami that caused significant damage to the coast of Chile and was observed as far away as Australia.

The earthquake took place along the boundary between the Nazca and South American tectonic plates, at a location where they converge at a rate of seventy millimeters a year. 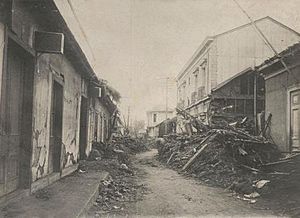 Damage in the Atacama Region

The earthquake was preceded by strong foreshocks on 3 and 7 November. The main shock lasted between thirty seconds and eight minutes according to various reports.

The length of the plate boundary that ruptured during the earthquake is estimated to be 390 km (242 mi).

The epicenter of the earthquake was well inland and the tsunami may have been caused by a submarine slide triggered by the shaking.

All content from Kiddle encyclopedia articles (including the article images and facts) can be freely used under Attribution-ShareAlike license, unless stated otherwise. Cite this article:
1922 Vallenar earthquake Facts for Kids. Kiddle Encyclopedia.