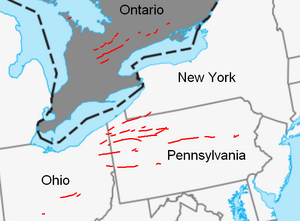 The Niles, Ohio/Wheatland, Pennyslvania tornado began around 6:30 p.m. and gathered strength as it headed towards Newton Falls, Ohio, producing F3 and F4 damage to the town. No deaths or injuries were reported in Newton Falls due to all residents taking shelter. Homes were also destroyed in Lordstown. It became an F5 later as it moved into Niles. Hundreds of homes in Niles were destroyed with the local shopping center leveled and several deaths occurred at the location. The tornado then crossed the state line into Pennyslvania, regaining its strength. 95% of the buildings in Wheatland were destroyed. The tornado weakened slightly as it moved towards Hermitage. 71 homes suffered damage or were destroyed. The tornado then destroyed homes in the Greenfield area before dissipating.

Later on tornadoes broke out in southern New York, nobody was killed in the state but 20 people were injured in New York state.

At the same time the Lion's Head, Ontario tornado dissipated, severe thunderstorms developed one to the east of Clinton, Ontario and another in Walkerton, Ontario area. The power was shut off in Barrie, Ontario at 4:00 p.m., as the tornado took out the local transformers. 5 people were killed in the area, including a mother and son who were killed when their home was leveled.

In total, 41 tornadoes touched down between 3 p.m. on May 31 and 12 a.m. on June 1, killing 90 people in total across the United States and Canada, with the most deadly tornado happening in the evening hours across Ohio and Pennyslvania. The tornado that struck Niles, Ohio was the deadliest tornado in Ohio since the Xenia tornado in 1974. The outbreak was the worst tornado outbreak in the United States since the 1974 Super Outbreak. It was also the third costliest in history, with $980 million in damage in Ohio, Pennyslvania, New York, and Ontario. 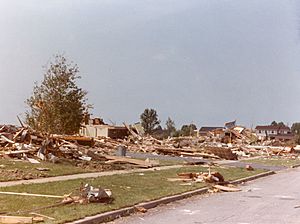 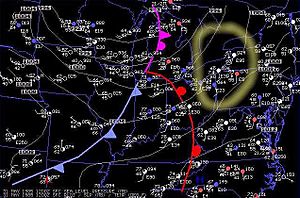 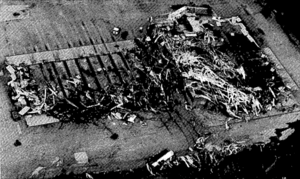 All content from Kiddle encyclopedia articles (including the article images and facts) can be freely used under Attribution-ShareAlike license, unless stated otherwise. Cite this article:
1985 United States-Canada tornado outbreak Facts for Kids. Kiddle Encyclopedia.