Newton Falls is a village located within Newton Township in Trumbull County, Ohio, United States. The population was 4,795 at the 2010 census. It is part of the Youngstown-Warren-Boardman, OH-PA Metropolitan Statistical Area.

The city is known for its ZIP code (44444) and for its covered bridge, which is the second oldest in the state of Ohio.

The city earned its name from the two sets of falls within the village, each on different branches of the Mahoning River.

Newton Falls was likely named for the first school teacher, Newton, and the falls south of the Covered Bridge. It grew in part from factors such as the river and its falls, steel manufacturing, and the proximity of the nearby Ravenna Training and Logistics Site.

On May 31, 1985, an F5 tornado struck the city as part of The 1985 United States-Canadian tornado outbreak, a deadly series of tornadoes that swept through Ohio, Pennsylvania, New York, and Ontario, Canada. The tornado to hit Newton Falls was the only F5 to hit Ohio that day. The tornado damaged most of the downtown area destroying dozens of homes, damaging the Senior and Junior High Schools (destroying the gymnasium and rendering the Junior High unusable), and devastating many businesses. Remarkably, no deaths were attributed to the tornado. There were between 70 and 80 injuries in the entire town. They discovered that just in Newton Falls alone, 400 families were homeless and the entire central business district had been destroyed. They indicated that warning sirens were the main reason the death toll, which was zero, wasn't that high. "If it hadn't been for the (warning) sirens, the death toll" that was zero "might have been higher," stated Ohio National Guard Major Calvin Taylor. There was even television footage of one of the freight trains being taken from its tracks. 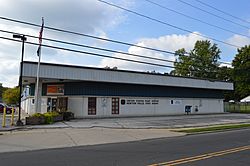 The village's post office, bearing the unusual ZIP code of 44444

The village last celebrated Dicker Days in 1987. It holds the largest Fourth of July Festivities in the county, which have been annual since 1946. The normally sleepy little town brings in up to 40,000 spectators to view the Parade and Fireworks, as well as a week-long carnival with entertainment provided by the Newton Falls Fourth of July Festivities Committee which is made up entirely of volunteers. The committee raises money for the fireworks through a Car Show, Bike Show, and 10,000 Dollar Raffle, in addition to donations.

Arts in the Park

This festival celebrates all forms of the Fine & Professional Arts and is organized by Christine Spletzer-Newman. It is very deliberately a collection of arts to do rather than arts to view. Festival goers paint legal graffiti on train cars, roll wheelchairs through paint and onto canvas, participate in the creation of a fairytale, and more. This summer event is held in the beautiful waterfall centered park known as Veteran's Park. Admission and most events are free. 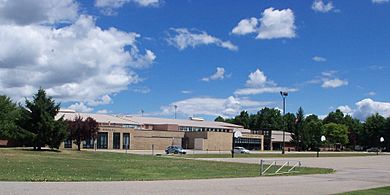 All content from Kiddle encyclopedia articles (including the article images and facts) can be freely used under Attribution-ShareAlike license, unless stated otherwise. Cite this article:
Newton Falls, Ohio Facts for Kids. Kiddle Encyclopedia.