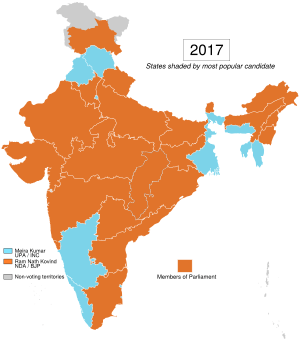 The 2017 Indian presidential election was held in India on 17 July 2017, and counting was done on 20 July 2017, five days before the incumbent President's term expires. The incumbent is eligible for re-election, as no term limits exist in India.

Initially receiving speculation for a re-election bid, Pranab Mukherjee decided not to run again in 2017 due to health concerns and problems relating to his age.

Kovind secured roughly two-thirds of the votes from the electoral college of elected members of federal, state and union territory legislatures and was elected to a five-year term as President. Kovind's term of office will begin on 25 July 2017.

According to polling after voting was closed on 17 July 2017, Ram Nath Kovind was expected to win the presidency with a voting outcome of 99%. Kovind was declared as the winner after the counting of votes held on 20 July 2017. He will be administered oath by the Chief Justice of India Jagdish Singh Khehar, as The 14th President of India on 25th July, 2017 at The Central Hall located in The Parliament House, New Delhi.

All content from Kiddle encyclopedia articles (including the article images and facts) can be freely used under Attribution-ShareAlike license, unless stated otherwise. Cite this article:
2017 Indian presidential election Facts for Kids. Kiddle Encyclopedia.