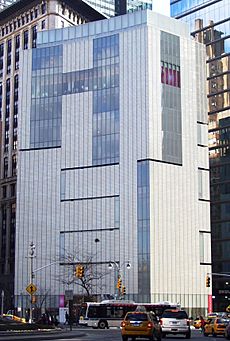 2 Columbus Circle is a 12-story building located on a small trapezoidal lot on the south side of Columbus Circle on the Upper West Side of Manhattan, New York City. Bordered by 58th Street, 59th Street, Broadway, and Eighth Avenue, it stands on the site of the former seven-story Grand Circle Hotel. It opened in 1964, after A&P heir Huntington Hartford hired architect Edward Durell Stone to build a museum for him at the site. Controversy was sparked in 2002 after the Museum of Arts and Design (MAD) purchased the building and planned to significantly alter its design, including modifying its facade. Calls had been made since 1996 for the building to be landmarked, so its proposed landmark status was brought into question with this renovation. The renovations were completed in 2008.

The seven-story Grand Circle Hotel, designed by William H. Cauvet, stood at this address from 1874; later called the Boulevard Hotel, it was demolished in 1960.

In 1964, A&P heir Huntington Hartford hired architect Edward Durell Stone to build a museum for him at 2 Columbus Circle. At the time Hartford had one of the world's greatest art collections, including works by Rembrandt, Monet, Manet, Turner, and Salvador Dalí. Hartford commissioned Dalí to paint a painting called The Discovery of America by Christopher Columbus for the opening, which attracted many celebrities, such as the Duke of Windsor. 2 Columbus Circle opened as the Gallery of Modern Art, displaying Hartford's collection. Until 2005, the building was a 12-story modernist structure, marble-clad with Venetian motifs and a curved façade. It had filigree-like portholes and windows that ran along an upper loggia at its top stories. With architect Philip L. Goodwin, Stone had previously designed the Museum of Modern Art in the International style, which opened to the public on May 10, 1939. Hartford wanted his Gallery of Modern Art to represent an alternative view of modernism.

The building was often called "The Lollipop Building" in reference to a mocking review by architecture critic Ada Louise Huxtable in which she called it a "die-cut Venetian palazzo on lollipops". However, three decades later she admitted that she got "a little lift, a sense of pleasure" when she walked past it. Nonetheless, Huxtable took issue with the campaign to save the building, writing in The Wall Street Journal that: "It was an unworthy performance that did little credit to anyone who cares about preservation and can only serve as an object lesson of how not to go about it."

Museum of Arts and Design renovation

Concurrently, interest in landmarking this building had begun in 1996, soon after the building turned thirty years old and became eligible for landmark designation. In this year, Robert A. M. Stern included it in his article "A Preservationist's List of 35 Modern Landmarks-in-Waiting" written for The New York Times. Stone's design at 2 Columbus Circle was listed as one of the World Monuments Fund's "100 most endangered sites" in 2006. The same year, Jennifer Raab, Chairman of the Landmarks Preservation Commission, reviewed with the Designation Committee of the Commission the possibility of recommending a hearing on 2 Columbus Circle. In 1998, the Department of Cultural Affairs and the Convention and Visitors Bureau vacated 2 Columbus Circle, and in 2002, under Landmarks Preservation Commission Chairman Sherida Paulsen, the Designation Committee reviewed the request to hold a hearing and again voted not to. MAD was designated as the site developer of 2 Columbus Circle by the New York City Economic Development Corporation in June 2002. In 2004, the National Trust for Historic Preservation called it one of America's "11 Most Endangered Historic Places". Despite a serious preservation effort, the New York City Department of Buildings approved the permit for MAD to begin removing 2 Columbus Circle's facade.

By the end of renovations in 2008, the museum moved to this building. The new location at 2 Columbus Circle, with more than 54,000 square feet (5,000 m2), more than tripled the size of the Museum's former space. It includes four floors of exhibition galleries for works by established and emerging artists; a 150-seat auditorium in which the museum plans to feature lectures, films, and performances; and a restaurant. It also includes a Center for the Study of Jewelry, and an Education Center that offers multi-media access to primary source material, hands-on classrooms for students, and three artists-in-residence studios.

Timeline of attempts at preservation

All content from Kiddle encyclopedia articles (including the article images and facts) can be freely used under Attribution-ShareAlike license, unless stated otherwise. Cite this article:
2 Columbus Circle Facts for Kids. Kiddle Encyclopedia.