Kids Encyclopedia Facts
This page is about the tower in Midtown Manhattan. For the tower in Lower Manhattan also called the AT&T Building, see 32 Avenue of the Americas.

550 Madison Avenue (formerly known as the Sony Tower or Sony Plaza and before that the AT&T Building), is a postmodern 647-foot-tall (197-meter), 37-story skyscraper located on Madison Avenue in Manhattan. Designed by Philip Johnson and completed in 1984, it was formerly the headquarters of Sony Corporation of America, and is the 95th tallest building in New York City. The tower was purchased by the Olayan Group and Chelsfield for $1.4 billion in 2016. It was designated a city landmark by the New York City Landmarks Preservation Commission in 2018.

The building was designed by architect Philip Johnson and partner John Burgee. It is close in concept to the 1982 Humana Building by Michael Graves. It became immediately controversial for its ornamental top (sometimes mocked as "Chippendale", after the open pediments characteristic of the famous English designer's bookcases and other cabinetry), but enjoyed for its spectacular arched entrance way, measuring about seven stories in height. With these ornamental additions, the building challenged architectural modernism's demand for stark functionalism and purely efficient design. The effect the building had on the public at large has been described as legitimizing the postmodern architecture movement on the world stage. Johnson described the building as "a symbolic shift from the flat top" of International Style skyscrapers like the nearby Lever House.

AT&T unveiled plans for a new 37-story headquarters in March 1978. The company initially expected construction to begin later that year and be complete by 1982. In October 1978, AT&T was granted permission to add 81,928 square feet (7,611.4 square meters), the equivalent of some four floors of space on its proposed building, in exchange for agreeing to provide open public space and a three-story communications museum. The firm was granted an additional 43,000 sq ft (4,000 m2), about two floor's worth, as a bonus for creating a 14,000 sq ft (1,300 m2) covered arcade along Madison Avenue that would include seating and retail kiosks. 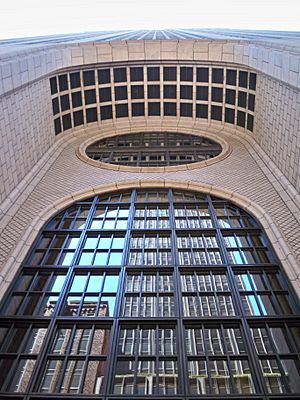 In 1982, with the Bell System divestiture set to take effect on January 1, 1984, AT&T decided to seek a tenant to lease 300,000 sq ft (28,000 m2) of space on the 7th through 25th floors, nearly half the space in the building, and was seeking rents of as much as $60 per square foot. The company had expected to relocate as many as 1,500 employees, most who had been located at the company's old headquarters at 195 Broadway, but the impending divestiture meant it would only be moving 600 employees into 550 Madison, with others being moved to another facility in Basking Ridge, New Jersey.

Spirit of Communication, a 20,000-pound (9,100-kilogram) bronze statue that had stood for 64 years at the top of AT&T's previous headquarters building at 195 Broadway, was disassembled and relocated to the lobby of 550 Madison in 1983. The 22 ft (6.7 m) figure, modeled in 1916 by American sculptor Evelyn Beatrice Longman, is holding bolts of electricity clutched in one arm reaching towards the sky and has coils of cable wound around the statue's torso. After AT&T moved out of the building, the statue was relocated to a spot outside of its Basking Ridge operational headquarters in 1992. In 2009, the statue was relocated to AT&T's current corporate headquarters in Dallas.

In 1984, the company indicated that it would not build the museum that it had originally committed to build in exchange for bonus zoning. The change of heart came as part of plans following the court-ordered divestiture of the Regional Bell Operating Companies and the reduced presence it expected to have at the building. In the face of firm opposition from the city, AT&T acquiesced to construction of a three-story exhibition space in an annex located adjoining the pedestrian walkway behind the building. 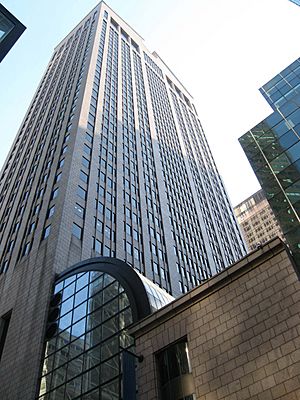 Western or "behind" side

AT&T had been granted a tax break of $42 million, under the condition that the company would keep its headquarters at 550 Madison Avenue and not rent out the space to other tenants. Having decreased in size substantially, AT&T signed a 20-year lease agreement on 550 Madison with Sony and relocated its headquarters to 32 Sixth Avenue, between Walker and Lispenard Streets. Sony was granted an option to purchase the building. AT&T returned $14.5 million to New York City to compensate it for tax abatements made as part of a 1987 renegotiation. 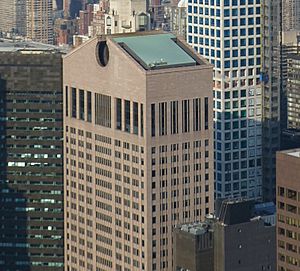 In 1992, Sony submitted plans that required approval by the New York City Planning Commission, in which it would take some of the open space in the building's atrium that had been used to obtain approval for additional floors on top of the building, and convert those areas into retail space. In exchange, the company would expand the glass-enclosed pedestrian walkway with the addition of planters and public seating. Sony expected that the proposed conversion of the 8,727 sq ft (810.8 m2) of public space could be converted into stores that could be leased at rates that The New York Times estimated could approach $200 per square foot. The company noted that the space was underutilized as a public amenity because it was "dark, windy and noisy" and that its conversion to commercial space would provide "retail continuity" with the remainder of Madison Avenue.

By 1996, Sony had consolidated most of the operations for its Sony Music Entertainment division at 550 Madison Avenue, for which The New York Times noted that "such high-profile and elaborate space is appropriate and necessary." That same year, Sony acquired additional space across the street at 555 Madison Avenue, a 445,000 sq ft (41,300 m2) building built in the 1960s that underwent renovations of its lobby, windows, bathrooms and other common spaces in conjunction with Sony's lease. Sony signed leases through 2013 on an additional 90,000 sq ft (8,400 m2) on the sixth through ninth floors of the building, on top of an initial rental of 90,000 sq ft (8,400 m2) of space on the second through fifth floors of the building that it had made in 1995. Rents on the floors had averaged about $34 per square foot at the time. Sony connected the two buildings using fiber optic cables that were run under Madison Avenue and installed microwave communications equipment on the top of the 555 building. Sony made these moves, which included early termination of leases on space in the surrounding area at 711 Fifth Avenue on the 43rd floor at 9 West 57th Street, as part of an effort to lower occupancy costs by bringing its businesses closer together. A cash-strapped AT&T sold the building to Sony in 2002 for $236 million, or $315 per square foot.

The building incorporated the Sony Wonder Technology Lab, a multimedia hands-on tour through the world of media, located in a four-story annex accessible through a glass-roofed atrium that connects 55th and 56th Streets in mid-block. It was open on Tuesdays through Saturdays, and Sony described the free exhibits as a "technology and entertainment museum for all ages". During 2008, the museum's third and fourth floors underwent renovations that were completed in fall 2008. Sony Wonder replaced Infoquest Center, a permanent telecommunications exhibition that had been built by AT&T. Sony permanently closed the lab on January 29, 2016.

On February 27, 2010, an accumulation of ice from the February 25–27, 2010 North American blizzard broke loose from an upper floor, breaking the glass ceiling of the atrium and injuring at least 15 inside who were attending a Purim celebration.

In December 2012, bidding started on the building and received over 20 bids including Joseph Sitt's Thor Equities, Mitsui Fudosan, and a partnership led by the Brunei Investment Agency. All of the bids included converting at least part of the space to hotel or condominium use. In January 2013 Sony announced plans to sell the building to the Chetrit Group for $1.1 billion – $685 million more than it had paid for it. Sony leased back its offices there through 2016, when it moved its headquarters south to 11 Madison Avenue.

The Chetrit Group planned to redevelop the building as a combination of 113 condominiums and the first Oetker Collection hotel in the United States. Shortly after the plans were announced, artist Dorothea Rockburne expressed concern that the developers would not adequately preserve two of her frescoes that adorned the building's sky lobby, which was set to be converted into the hotel's lobby. Chetrit abandoned this plan and sold the building to Olayan and Chelsfield in 2016, relinquishing the "Sony Tower" name. Olayan and Chelsfield have announced plans to rebrand the building and reconfigure the existing space. Other than a ground floor restaurant, the building is currently empty. A group of banks including ING Group, Bank of East Asia, Crédit Agricole, Société Générale, and Natixis provided $570 million in financing to facilitate the redevelopment.

In late October 2017, the Olayan Group announced its plans for a large renovation of the building, with the architectural firm Snøhetta to design the changes. The firm planned a glass curtain wall over the street front and to replace a glass arcade and annex building with an outdoor garden. The renovation was anticipated to cost $300 million and raise rents at the building to between $115 and $210 per square foot, some of the highest office rents in New York City. Several architecture critics, architects, artists, and others voiced their opposition to the plans.

A November protest and petition, organized by Starship Chicago and The Absent Column filmmaker Nathan Eddy, drew widespread media coverage. A week later, the New York City Landmarks Preservation Commission announced it would vote to decide whether or not to calendar the building for landmark status consideration. On November 27, the commission voted unanimously to put the building on its calendar. Despite efforts to preserve the tower's architecture and significant interiors, demolition of the building's original ground floor lobby began in January 2018. The protests and ensuing debate landed the building on the list of the most controversial architecture stories of 2017. On July 31, 2018, the commission voted unanimously to designate the entire exterior of the building a New York City landmark. Eddy described the landmarking as "an astonishing and marvelous victory".

All content from Kiddle encyclopedia articles (including the article images and facts) can be freely used under Attribution-ShareAlike license, unless stated otherwise. Cite this article:
550 Madison Avenue Facts for Kids. Kiddle Encyclopedia.