The 69th Regiment Armory is a historic National Guard armory building located at 68 Lexington Avenue between East 25th and 26th Streets in the Rose Hill section of Manhattan, New York City. The building began construction in 1904 and was completed in 1906. The armory was designed by the firm of Hunt & Hunt, and was the first armory built in New York City to not be modeled on a medieval fortress; instead, it was designed in the Beaux-Arts style.

The Armory was the site of the controversial 1913 Armory Show, in which modern art was first publicly presented in the United States, per the efforts of Irish American collector John Quinn. It has a 5,000 seat arena that is used for sporting and entertainment events such as the Victoria's Secret Fashion Show. The Armory is also the former home of the Civil Air Patrol – Phoenix Composite Squadron. The building is still used to house the headquarters of the New York Army National Guard's 1st Battalion, 69th Infantry Regiment (known as the "Fighting Irish" since Gettysburg), as well as for the presentation of special events.

The building was declared a National Historic Landmark in 1965, and a New York City landmark in 1983. 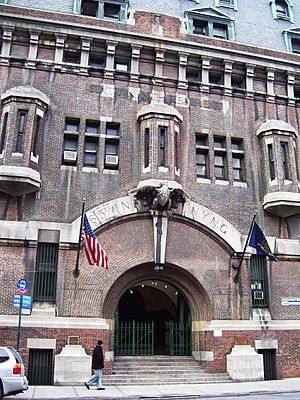 The entrance to the building

All content from Kiddle encyclopedia articles (including the article images and facts) can be freely used under Attribution-ShareAlike license, unless stated otherwise. Cite this article:
69th Regiment Armory Facts for Kids. Kiddle Encyclopedia.