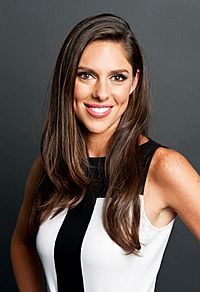 Abigail Haight Huntsman (born May 1, 1986) is an American television personality. She was born in Philadelphia, Pennsylvania. She is currently a co-host of ABC's The View.

Huntsman was a reporter for Fox News Channel and co-host of Fox & Friends. She was a host on MSNBC. She is a daughter of former Utah Governor Jon Huntsman Jr..

All content from Kiddle encyclopedia articles (including the article images and facts) can be freely used under Attribution-ShareAlike license, unless stated otherwise. Cite this article:
Abby Huntsman Facts for Kids. Kiddle Encyclopedia.