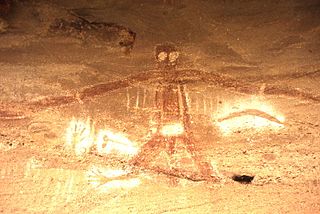 These sites are comparable with the petroglyphs of Native Americans and the Rock Art found elsewhere in Australia, but are not restricted to rock carvings. Many of the sites are on the Register of the National Estate.

The Aboriginal Australians arrived in the north of Australia around 50,000 years ago. Sites over 22,000 years old have been found in the Blue Mountains area west of Sydney, while sites going back 40,000 years exist at Lake Mungo. There are some thousands of known sites, many but not all located in national parks. Some sites are also found in more suburban settings; rock carvings can be seen in the Sydney suburbs of Bondi and Tamarama.

Their art was part of day-to-day life and would normally have had a purpose. One such purpose is thought to have been what some people call "wish fulfilment magic"—or sympathetic magic—in which the act of creating the magical work is thought to bring about the event depicted in the work. For example, a hunting scene—a common subject in rock carvings—would be aimed at bringing about the desired reality of good hunting.

There were also many artworks that were created for specific ceremonial purposes and which were not intended to last after the ceremony was over. In addition to such themes, there were also works of a more secular nature, which could be created for a number of reasons, including the instruction and entertainment of children.

There are substantial variations in the character of art developed in different parts of New South Wales. Art in the western part of the state could be very different from the art created in coastal areas. Aboriginal sites in the state are administered by the National Parks and Wildlife Service of New South Wales. All known sites are recorded on the register known as the Aboriginal Heritage Information Management System (AHIMS), which is run by the National Parks and Wildlife Service.

There is generally a policy of protecting Aboriginal sites, although a small number of sites are publicised. Notable examples are those at the Basin Track, Ku-ring-gai Chase National Park, and the Bulgandry site, Brisbane Water National Park. However, most sites are not publicised, and restricted sites (colloquially known as sacred sites) will never be made public. If anyone thinks they have a legitimate reason for wanting to inspect sites that are not normally available to the public, they can apply to AHIMS for permission.

The sites are of many different types, for example:

Paintings cover a wide range of subjects, both spiritual and secular. Coloured pigmentation was created with ochre (giving a red/orange colour), charcoal (for a black pigmentation) and ash (for grey pigmentation). One good example is the rock shelter popularly known as Baiame's Cave, at Milbrodale, with paintings depicting a large figure that may be Baiame, the Sky Father.

Rock carvings, also known as petroglyphs or Rock Engravings, are of a style known as "simple figurative", which conventional archaeological thinking dates to the last 5000 years. Other engravings show European sailing ships, and so cannot be more than about 200 years old. Thus we are left with a date range of 5000–200 years ago. It is likely that some of the freshest engravings represent the later part of that time range, whilst the most worn represent the earliest part. However, the situation is complicated by the fact that we know the engravings were sometimes "re-grooved" during ceremonies. Carvings could be very large. In some carvings, the figure of Baiame the Sky Father could be eighteen metres tall.

In addition to pictorial carvings, there are many grinding grooves, caused by grinding stone implements on a rock surface to shape them and give them an edge. Areas like Sydney and the Blue Mountains have many rock carvings because they predominantly consist of sandstone (known as Hawkesbury sandstone), which is a very suitable surface for rock carvings. See Sydney Rock Engravings for the main article on these.

Hand stencils can often be found in rock shelters and caves, which have given them protection from the elements over the years. They were created by placing the hand on a rocky surface and blowing pigmentation around it, leaving the silhouette of the hand on the rock. There is often a number of them in one place. The best-known example is Red Hands Cave, in the Blue Mountains National Park, which has many stencils, including those created by children as well as adults.

Charcoal drawings were exactly that: drawings executed with a piece of charcoal. Like the rock carvings, they could be of a wide range of subjects, with animals often featured.

Shell middens developed in occupation sites where shell fish were consumed. Over the years, layers of shells would build up, creating a concentration of many shells in the soil around the occupation site.

Shield trees are seen occasionally in the Sydney bush. A substantial piece of bark would be cut out of a tree and used as a shield or tray. A visible "scar" was thus left behind, which could vary considerably in size, some being quite large.

Restricted areas (otherwise known as sacred sites) are usually of a spiritual nature and were restricted to adult males and, in some cases, women. These sites could include ceremonial sites, bora grounds, men's sites and women's birthing sites.

It is necessary to distinguish between occupation sites and sacred sites, a subject about which there is often great confusion. Many people think that all Aboriginal sites are "sacred sites", but the reality is more complex. Before white settlement, most indigenous sites were occupation sites, which were used by all members of a tribe. Sacred sites, on the other hand, were restricted to adult males, except for certain women's sites. In more recent times, all indigenous sites have become known as sacred sites; those that were previously known as sacred sites are now known as restricted sites.

It is worth noting that there are many imitation sites, in which Europeans created imitations of Aboriginal art, usually in the form of rock carvings. One of the most prominent examples is a large carving of a kangaroo alongside a walking track at Grotto Point, in the Sydney Harbour National Park. This has been known for some time to be an imitation (or fake, as some would say).

All content from Kiddle encyclopedia articles (including the article images and facts) can be freely used under Attribution-ShareAlike license, unless stated otherwise. Cite this article:
Aboriginal sites of New South Wales Facts for Kids. Kiddle Encyclopedia.